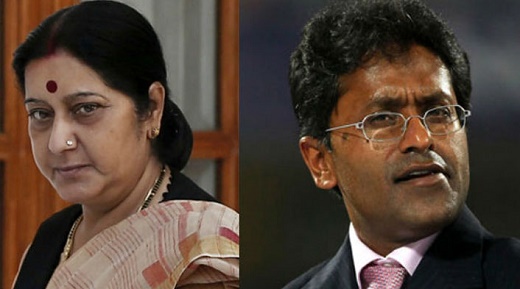 New Delhi: The Indian Premier League founder, Lalit Modi cleared the air on the recent controversy surrounding his visa row and Minister of External Affairs Sushma Swarajâ€™s involvement in the case on Tuesday.

In an interview with a leading publication, Modi said he is not a fugitive andÂ blamed Rupert Murdoch behind the leaks on Sushma Swaraj.

He also said, “the Swaraj family have been friends with him for almost 20 years.” Along with this, Modi said he has legal relationship them with Bansuri being his lawyer for four years.

Modi also challenged the Enforcement Directorate to prove even one case against him.

On the controversy surrounding Rajasthan Chief Minister, Vasundhara Raje, he said that the CM is a close friend, who gave a written statement and accompanied his wife during her cancer treatment to Portugal.

In another development, Modi also said that Swaraj Kaushal appeared pro bono in court on his behalf.

In the interview, Lalit Modi said that Shashi Tharoor lost his ministerial job for lying about not having any connection with Kochi IPL franchise team. He also confirmed calling Sushma Swaraj for assistance.

Following the threat to him in India and the impending case filed against him, Modi said he could have given up his citizenship and taken residency status of any country but will fight to clear his name. He also said that his case in UK has gone through various stages and also in India.

Lalit Modi blamed the previous UPA government and said there was a secret correspondence between the UK and India which threatened to affect the bilateral relation. Modi blamed P.Chidambaram for UKâ€™s failure to get him deported back to India. He blamed the entire UPA government for being against him.

Following the interview, Congress leader and current IPL commissioner Rajiv Shukla said that he has not been in contact with Lalit Modi for over the last 3 years.

Further reactions were noted with Sharad Pawar coming out and clarifying that he and Praful Patel tried to convince Modi to return home to India.

Former Rajasthan Chief Minister, Ashok Gehlot, reacting to the interview called for the resignation of Vasundhara Raje and said that he has been calling to investigate the Raje-Modi nexus since 2003.