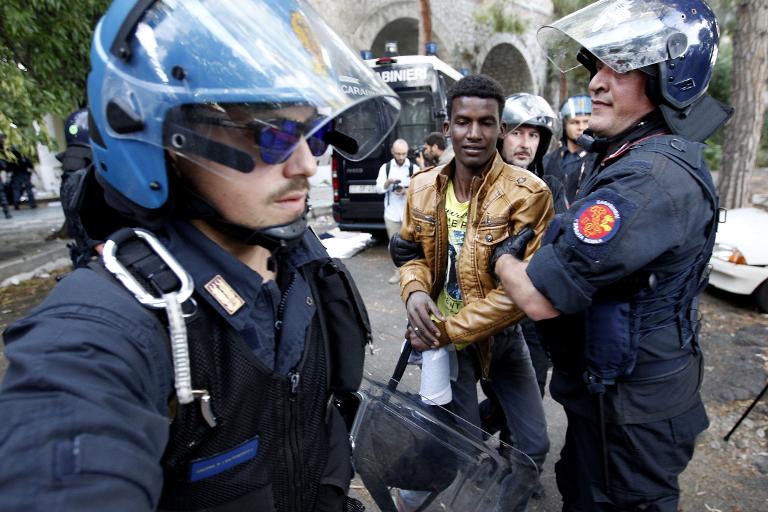 Italy warned Tuesday that EU solidarity is at stake if the 28-nation bloc fails to reach a deal on sharing the burden of the Mediterranean migrant crisis.

Italian Interior Minister Angelino Alfano said as he arrived for talks with his counterparts in Luxembourg that France risked undermining EU principles.

“Europe has to act like Europe because it is the right to free movement and the common asylum policy that are at stake,” Alfano told reporters after France refused entry to hundreds of African migrants at the border town of Ventimiglia.

“The principle of responsibility and solidarity are at stake. We are working to avoid Europe from becoming politically bankrupt and this issue of immigration is one on which Europe either wins or loses,” he said.

“The scenes at Ventimiglia are a punch in the face for Europe and the proof that migrants do not come to Italy to stay in Italy but to go to (the rest of) Europe.”

About 250 migrants — most of them English-speaking Africans — have been camped in Ventimiglia for days, protesting that they should be allowed to enter France on their way to their desired destinations in northern Europe.

Behind Alfano’s angry remarks is a threat by Italian Prime Minister Matteo Renzi to adopt a “plan B” that would “hurt” Europe if EU member states fail to show solidarity.

No specifics were given but Italian media reported Monday that Rome could start issuing newly arrived migrants with temporary visas giving them the right to travel throughout the Schengen zone that allows free travel in most of Europe.

French interior minister Bernard Cazeneuve insisted that France was not blocking the border when he spoke to reporters following a meeting with Alfano and their German counterpart Thomas de Maiziere before the larger meeting of ministers.

But he said France was acting within its rights to send illegal immigrants or asylum seekers back to Italy.

As justification, France cites the Dublin accords under which new arrivals in the European Union are supposed to be processed by the country in which they first land.

Italy says the Dublin rules are no longer appropriate given the scale of the problem. More than 220,000 people have landed at its southern ports since the start of 2014 and there is mounting anger over what Rome sees as foot-dragging by its EU partners.

“We are in favour of solidarity, but not solidarity without responsibility,” Cazeneuve said.

“If there’s no responsibility, then we jeopardise Schengen and in the end it risks not having solidarity at all.”

The European Commission, the EU executive, last month asked its member states to admit 40,000 asylum seekers from Syria and Eritrea landing in Italy and Greece.

The emergency proposal, which came atop another one to resettle in member states some 20,000 Syrian refugees, is in response to a surge in migrants making the dangerous journey across the Mediterranean.

Many EU governments, worried about the rise of anti-immigrant parties, reject quotas for distributing refugees and asylum seekers.

No deal was expected during the talks in Luxembourg.