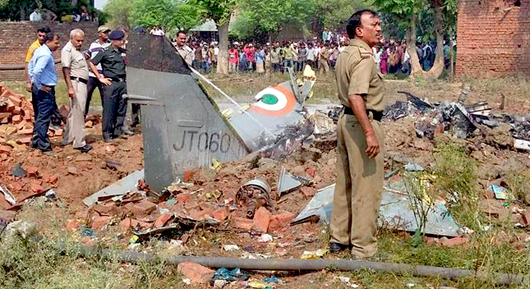 Fortunately, both the pilots managed to eject safely.

The plane took off atÂ 7:25 amÂ from Allahabad was on a routine training sortie.

It crashed about 13 km from Allahabad atÂ 8:47 am. A court of inquiry has been ordered for the incident.

This is the second Jaguar aircraft of the Indian Air Force that has crashed this year so far. In March, a Jaguar fighter crashed near Kurukshetra in Haryana after a technical snag; the pilot had ejected safely.

The Jaguar is a twin-engine, single-seater deep penetration strike aircraft of Anglo-French origin which has a maximum speed of 1350 km per hour (Mach 1.3). It has two 30 mm guns and can carry two R-350 Magic CCMs (overwing) along with 4750 kg of external stores (bombs/fuel), says the Indian Air Force’s website.