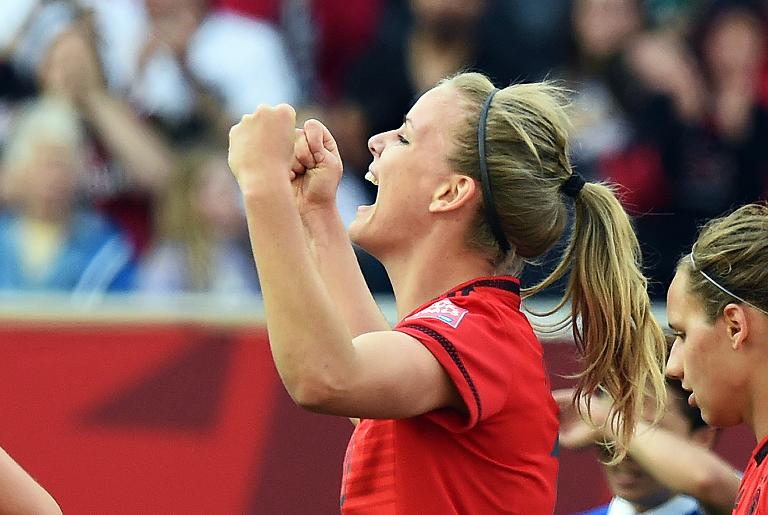 Victorious Germany and Norway advanced to the last 16 of the Women’s World Cup on Monday as a draws are enough to see hosts Canada and China through.

Favourites Germany beat Thailand 4-0 to progress as Group B leaders ahead of Norway, who secured their berth by beating Ivory Coast 3-1.

Canada were held 1-1 by the Netherlands but it was enough to top Group A ahead of China, who were held 2-2 in their do-or-die clash against New Zealand.

The four join champions Japan and Brazil, the 2007 runners-up, who are already through to the knockout rounds with a game to spare.

Germany came up against stiff resistance from the 29th-ranked Asians in Winnipeg, before Melanie Leupolz broke through after 24 minutes.

And two quick-fire headers from second-half substitute Lena Petermann on 56 and 58 minutes got the world’s top ranked team into their stride.

The damage could have been worse but for solid goalkeeping from Thailand’s Waraporn Boonsing before Sara Daebritz netted a fourth for the 2003 and 2007 winners on 73 minutes.

“It wasn’t our best match but it gives us a bit more self confidence,” said Germany’s Leupolz.

Germany have seven points from three games, equal with Norway, but are ahead on goal difference largely thanks to their 10-0 hammering of Ivory Coast in their opener.

Thailand, in third with three points, could still advance as one of the four best third-place finishers, but fellow newcomers Ivory Coast head home after three loses with three goals scored to 16 conceded.

“We still have a chance to go through to the next round. We have some hope,” said Thailand coach Nuengruethai Sathongwien.

In Moncton, an Ada Hegerberg double on six and 62 minutes, and a third from Solveig Gulbrandsen on 67 gave 1995 winners Norway all three points against Ivory Coast.

Ange N’Guessan got one back for the 67th-ranked Ivory Coast after 71 minutes.

Canada were held 1-1 by the Netherlands in Montreal after Ashley Lawrence’s early goal was cancelled out by a Kirsten Van De Ven equaliser three minutes from time.

The hosts have five points from three games and as Group A winners next meet the best third-place finisher from Group C, D, or E in Vancouver on Sunday.

“This team needs to keep on a roll,” said Canada coach John Herdman.

“We wanted to win the group because we wanted to go back to BC (Vancouver) and give the fans what they’ve been waiting for.”

China battled to a 2-2 draw against New Zealand as tempers flared in Winnipeg Stadium.

Chinese coach Hao Wei was sent to the stands late for hampering Ria Percival’s bid to take a quick throw-in and New Zealand boss Tony Readings refused to shake his hand after the game.

A point was good enough for the Chinese, runners-up in 1999, to advance but dumped New Zealand out of the tournament once again in the group stage.

Rebekah Stott scored first for New Zealand from a corner after 28 minutes, and four minutes before the break Wang Lisi equalised from the penalty spot.

China pulled ahead with 30 minutes left when Wang Shanshan headed in. But the advantage lasted only four minutes before Hannah Wilkinson headed past Wang Fei.

The tournament continues on Tuesday with all to play for in Group D with the United States taking on Nigeria and Australia up against Sweden. In Group C Japan tackle Ecuador and Switzerland face Cameroon.