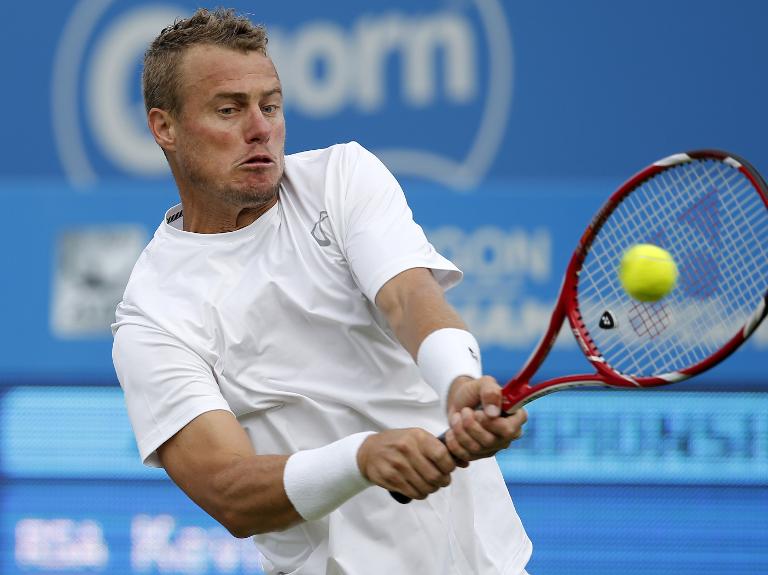 Lleyton Hewitt suffered a frustrating farewell to Queen’s Club as the four-time champion squandered a match point in a 6-7 (5/7), 7-5, 6-2 defeat against South Africa’s Kevin Anderson on Monday.

Hewitt is embarking on a prolonged goodbye tour before retiring after next year’s Australian Open and he was hoping for one last hurrah on his final visit to the Wimbledon warm-up event.

But the injury-ravaged 34-year-old, making his 16th Queen’s appearance, is ranked 100 places below the big-serving Anderson and he was unable to bridge that class gap in a hard-fought first round clash.

After failing to serve out the match in the second set, Hewitt allowed Anderson to wriggle out of trouble and the world number 17 eventually coasted through to a second round tie against French Open champion Stan Wawrinka or Australian youngster Nick Kyrgios.

“I’ve loved playing here for so many years. It’s one of my favourite tournaments of the year outside of the majors,” Hewitt said.

“It was special to come back. Knowing it was going to be the last one, as well. I’ve played so many big matches in front of big crowds here over the years.

“For most of the first two sets I played pretty well out there.

“I don’t think it will be that emotional the rest of the year. I’m fortunate because not many people in sport get to go out on their terms and so far it looks like I’ll be able to do that.”

Only Boris Becker, John McEnroe and Andy Roddick have won Queen’s as often as Hewitt, who made his debut here as a brash teenager in 1998 and claimed the last of his titles in 2006.

Despite his success in this manicured corner of west London, the most recent of Hewitt’s two Grand Slam titles came way back in 2002 at Wimbledon and he has spent the latter part of his career battling to overcome a series of debilitating injuries, including having a metal plate inserted into the toe of his left foot.

His ranking has slipped down to 117 as a result and a fifth defeat in his six matches in 2015 suggests he is limping rather than sprinting towards his career finish line.

Granted a wildcard by nostalgic tournament organisers, Hewitt did his best to roll back the years and, although he couldn’t convert five break points in the first set, he did just enough to take the tie-break.

After saving a break point in the second game of the second set, Hewitt was back on the offensive and he broke for a 4-3 lead when Anderson tamely netted a backhand.

But crucially he couldn’t convert a match point when he served for the win at 5-3 and Anderson broke back.

That proved the turning point as the South African reeled off four successive games to take the set before overpowering the fading Hewitt in the decider.

While his farewell hadn’t gone to plan, Hewitt was still given a standing ovation by the packed Centre Court crowd, which included his wife Bec and assorted members of his family.

Meanwhile, Richard Gasquet became only the third Frenchman in the Open era to win 400 singles matches after defeating Italian qualifier Simone Bolelli 6-1, 6-2 in the first round.

The world number 19, who was back in action for the first time since his French Open last-16 exit against Novak Djokovic, joins Yannick Noah (476) and Fabrice Santoro (470) in the select group of Frenchmen to reach 400 victories.

The 28-year-old’s reward for reaching that notable landmark is a second round tie against Canadian third seed Milos Raonic.

In his first match for over a month following minor surgery on his right foot, Raonic marked his Queen’s debut by defeating British wildcard James Ward 5-7, 6-3, 6-2.