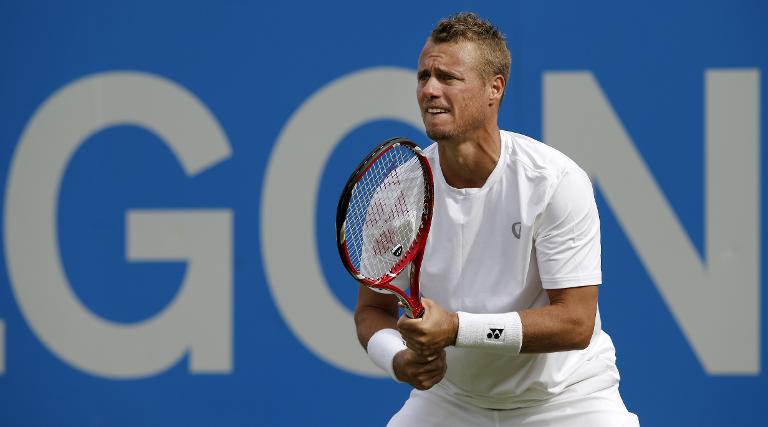 Lleyton Hewitt insists he can still make some noise in his final appearance at Wimbledon despite being forced to bid a premature farewell to Queen’s Club.

Hewitt, famous for his shrieked war cry of ‘C’mon’ whenever he wins an important point, is embarking on a prolonged goodbye tour before retiring after next year’s Australian Open and would love to roll back the years at Wimbledon later this month.

The 34-year-old Australian won Wimbledon in 2002 and regards the brief grass-court season as his favourite time of year on the ATP Tour.

Hewitt’s hopes of making a strong farewell run in the Wimbledon warm-up event at Queen’s were shattered by Kevin Anderson as the big-serving South African saved a match point en route to winning 6-7 (5/7), 7-5, 6-2 in their first round clash in west London on Monday.

That was the injury-ravaged Hewitt’s fifth defeat in six matches in 2015.

But he remains convinced he can still cause an upset or two at Wimbledon given a decent draw.

“The last two weeks I’ve played a couple of pretty good grass court players. It would be nice to play someone that’s not quite as good as those two on grass first up at least,” Hewitt said.

“You’re in the hands of the gods, though, when you’re not seeded. You can come up against anyone. But as I showed for the majority of the first two sets today, I felt like my standard of tennis was still pretty damn good.”

In reality, Hewitt has been on the decline for several years due to his advancing age and injuries and his ranking has dropped to 117 as a result.

His last Grand Slam quarter-final appearance came at Wimbledon in 2009, but that lacklustre record won’t stop the feisty Australian going down all guns blazing at the All England Club in two weeks time.

“It was always in my mind that I wanted to come back and play Wimbledon one more time, and obviously here at Queen’s,” he said.

“I love this time of the year. As soon as I got to London and started preparing for Wimbledon and Queen’s I felt right at home straightaway.

“Obviously Wimbledon, going back there as a former champion and member, it’s a pretty special place.”

Although Hewitt was unable to win another Grand Slam after taking the Wimbledon title, the former world number one, whose other major triumph came in the 2001 US Open, says he has no regrets about his career path.

“Even though I was young, I made a lot of sacrifices up until that point as well to try and be the best tennis player I could be,” he said.

“It’s a relief, I guess, in some ways, too, that you can go out there and enjoy that you’re a former winner of probably the biggest tournament there is in the world.

“To me it doesn’t really matter if you win it once or five times. I’m pretty sure I’ll take what I got.”

Once his grass-court farewell is complete, Hewitt will turn his attention to helping Australia make a strong run in this year’s Davis Cup, while also serving as a father figure to young compatriots Nick Kyrgios and Thanasi Kokkinakis.

“I’m going to work my schedule around the Davis Cup. For the rest of year that will be the priority,” he said.

“Obviously I’ll be helping out Australian tennis in some way at some stage when I retire and it’s kind of started this year, anyway.

“I feel like I have a really good connection with those guys. They are quality players moving forward.”