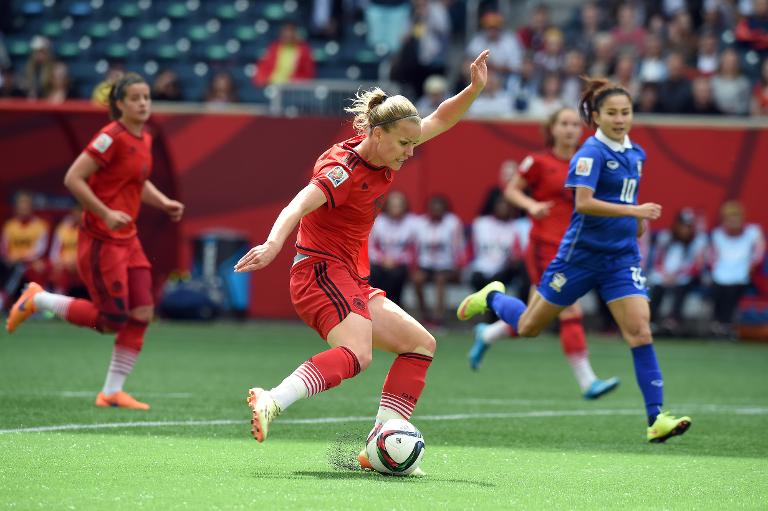 Top-ranked Germany beat Thailand 4-0 to advance to the knockout rounds of the Women’s World Cup as Group B leaders on Monday.

The 2003 and 2007 champions have seven points from three games and finish ahead of Norway, who beat the Ivory Coast 3-1 in their final group match in Moncton.

Norway also have seven points but are behind Germany on goal difference. Thailand finish third with three points with the Ivory Coast finishing with no points.

Germany next play the best third-placed finisher from Group A, C, or D in Ottawa on Saturday.

A first half goal from Melanie Leupolz put Germany on their way with Lena Petermann scoring her first international goals from two headers after 56 and 58 minutes.

Thailand, ranked 29, held up well in the first half largely thanks to solid goalkeeping from Waraporn Boosing.

She pulled off a string of saves before Leupolz, returning from a bruised bone, found a way through on 24 minutes.

The Bayern Munich midfielder rose highest to head in from a corner.

Celia Sasic had a chance to add to the tally after 37 minutes but her shot lacked power and went straight into the hands of the Thai goalie.

Back after the break, the Germans pushed forward with 21-year-old Petermann, playing just her fourth international, rose highest to nod in a cross after 56 minutes and two minutes later again headed past Waraporn.

Sara Daebritz got a fourth for Germany after 73 minutes.

Germany opened their campaign by thrashing Ivory Coast 10-0 before drawing 1-1 with Norway.

The Germans suffered a shock early exit at the 2011 World Cup when the hosts were knocked-out in the quarter-finals by eventual winners Japan, who beat the USA on penalties in the final.