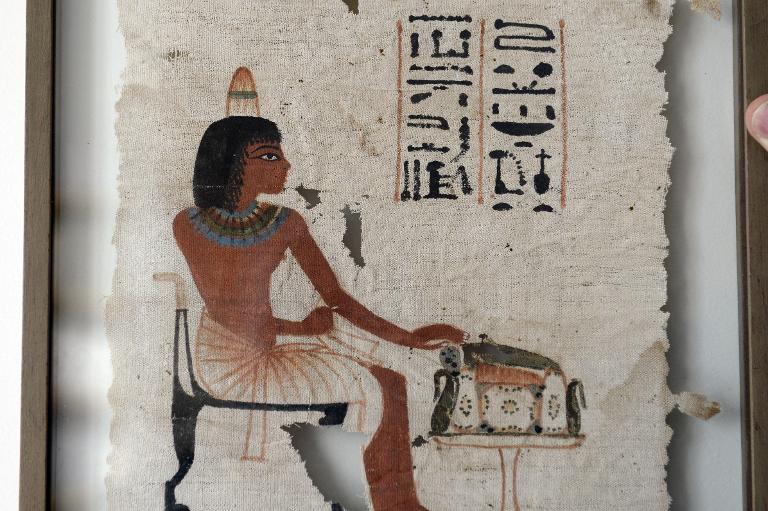 A rare ancient Egyptian burial cloth more than 3,000 years old is to go under the hammer on Thursday in Paris, an exceptional sale of an artefact usually found only in museum collections.

The small square of vividly painted fabric is among roughly 20 known to exist in the world, the majority of which are on display at museums like the Louvre and the New York Metropolitan Museum of Art.

According to Piasa, the auction house hosting the sale, it is difficult to set a price estimate, given the unique nature of the item.

The 29-by-21 centimetre (11-by-8 inch) shroud, which would have been placed on the deceased’s sarcophagus, bears the likeness of a man named “Ta-nedjem” or “Gentle Land”, who died some 3,400 years ago and who is unknown to researchers.

Its path to the auction block is remarkable, passing through the hands of an American billionaire, his unhappy wife and finally his mistress.

The final step toward auction came when Piasa’s director Henri-Pierre Teissedre found the cloth while doing an inventory of the home of respected French writer and publisher Jeanne Loviton, who died in 1996 after leading a life that could have been torn from a novel.

The shroud is made from the same type of cloth used to produce the bandages that wrap mummies and dates from the New Empire, between 1,400-1,300 B.C., a period experts consider a high point of Egyptian civilisation.

“Ta-nedjem” is shown in profile, sitting on a black chair with curved back and animal legs. His clothes and ornaments, like the richness of the furniture, show he was a man of status.

In the background are two columns of hieroglyphics reading: “Offering of all things good and pure for the Ka (vitality) of Ta-nedjem of just voice.”

This cloth “carries numerous similarities with the one on display at the Louvre, same painter but a different scribe,” said art expert Christophe Kunicki.

– Gift to his mistress –

While the shroud itself has experts excited, the fact it was discovered at the home of Loviton has raised a few eyebrows in France as well.

She was the mistress to some famous men, including poet and philosopher Paul Valery as well as American billionaire Arthur Sachs.

Loviton was also renowned for work in French literature, including being the publisher of the writing of Louis-Ferdinand Celine who is best known for his novel “Journey to the End of the Night.”

The shroud was a gift to Loviton from Sachs, part of the Goldman Sachs financial dynasty.

He initially bought the shroud in 1927 as a gift for his wife and she kept it in their bathroom, but she grew tired of it and returned it to her husband.

He in turn gave it to his mistress, Loviton, who still had it in her home when she died.

How the ancient work of art came to be on the market is a mystery lost to the passage of time.

Still, experts believe there is little doubt as to the shroud’s authenticity.

“This would have to be the work of an extremely talented forger and great Egyptologist, who would have had to use special pigments. That seems impossible,” said Annie Gasse, an expert with France’s National Centre for Scientific Research.