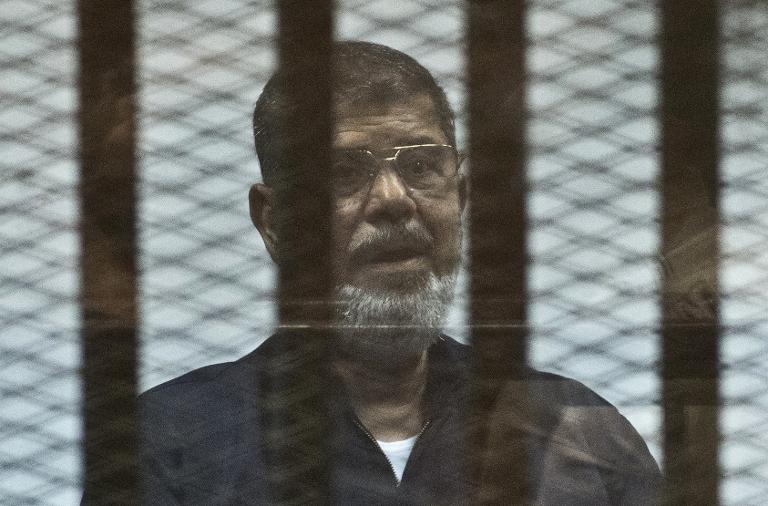 An Egyptian court on Tuesday upheld a death sentence against ousted Islamist president Mohamed Morsi for plotting jailbreaks and attacks on police during the country’s 2011 uprising.

In a separate trial in April, Morsi had previously been sentenced to 20 years in jail on charges of inciting violence against protesters in 2012 when he was president.

Sisi has since overseen a sweeping crackdown on Morsi’s supporters, with hundreds of Islamists killed and more than 40,000 in custody, according to Human Rights Watch.

Hundreds have also been sentenced to death after speedy mass trials described by the United Nations as “unprecedented in recent history”.

The authorities designated Morsi’s Muslim Brotherhood a “terrorist group” in December 2013, accusing it of being behind violence that erupted after his ouster — an accusation denied by the Islamist movement.

Tuesday’s ruling upheld an initial verdict by the same court from May 16 sentencing Morsi and about 100 other defendants to death in the jailbreak case.

After the latest verdict was read, Morsi, dressed in a blue prison uniform, smiled, clenched his fists together and raised them in a sign of defiance.

The Muslim Brotherhood called for protests against the verdicts to be staged on Friday over what it described as “farce trials”.

Ties between the United States and Egypt plummeted after Morsi’s ouster, with Washington freezing its annual $1.3 billion in military aid to the country.

But relations have since improved and most of the aid was unblocked late last year.

Judge Shaaban el-Shamy also confirmed the death sentences against about 100 other defendants, including the Muslim Brotherhood’s spiritual guide Mohamed Badie and Qatar-based cleric Yusuf Qaradawi, who was tried in absentia.

Twenty-one other defendants have been sentenced to life in prison.

In the espionage case, Shamy confirmed earlier death sentences against 16 defendants, though only three are in custody including Muslim Brotherhood financier Khairat al-Shater.

Badie and 15 others were also sentenced to life in prison in the spy case, while three others were given seven years.

They were convicted of spying on behalf of the international Muslim Brotherhood organisation and Hamas from 2005 to August 2013 “with the aim of perpetrating terror attacks in the country in order to spread chaos and topple the state”.

All of Tuesday’s verdicts can be appealed.

Sisi has defended the rulings against his opponents, saying they are part of the judicial process and can be appealed.

But rights groups accuse Sisi’s regime of being even more repressive than that of veteran strongman Hosni Mubarak, who was ousted in the popular uprising in 2011.