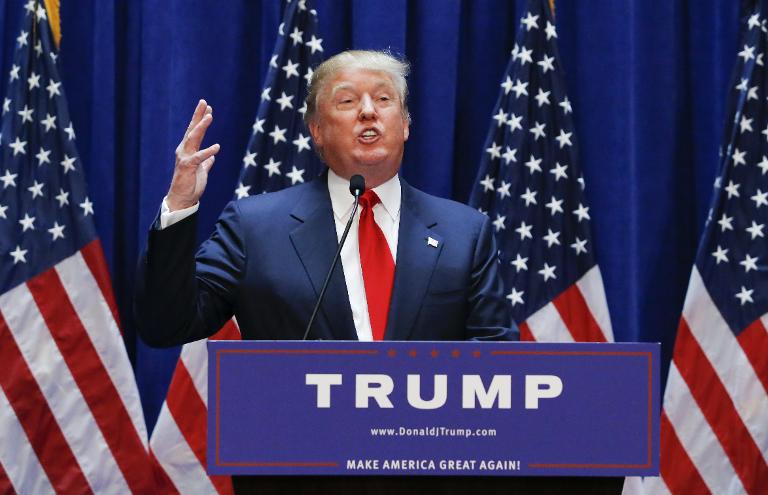 Property tycoon Donald Trump, one of America’s most flamboyant and outspoken billionaires, threw his hat into the 2016 race Tuesday for the White House, promising to make America great again.

The 69-year-old long-shot candidate ridiculed the country’s current crop of politicians as “stupid” and vowed to take on the growing might of China in a speech launching his run for the presidency.

“I am officially running for president of the United States and we are going to make our country great again,” he said from a podium bedecked in US flags at Trump Tower on New York’s Fifth Avenue.

The tycoon strode onto the stage after sailing down an escalator to the strains of “Rockin’ In The Free World” by Canadian singer Neil Young after being introduced by daughter Ivanka.

His announcement follows years of speculation that the man known to millions as the bouffant-haired host of American reality TV game show “The Apprentice” would one day enter politics.

Trump identifies as a Republican and has supported Republican candidates in the past. But in his speech he did not explicitly say if he was running for the party’s nomination or as an independent.

He trails in polls behind rival Republican candidates. Last month, just five percent of voters said would vote for Trump at the Republican primary, according to the Quinnipiac University.

And in March, 51 percent of all voters said they would definitely not vote for him, another Quinnipiac poll found.

But none of that deterred Trump.

“Sadly, the American dream is dead. But if I get elected president, I will bring it back bigger and better and stronger than ever before, and we will make America great again,” he said.

Considered one of the least politically correct figures in public life, Trump denounced US foreign and economic policy, ridiculed his rival candidates and vowed to reverse what he called US decline.

He promised to build up the military, stand up to the Islamic State extremist group in Iraq and Syria, build a wall on the southern border with Mexico and stop Iran from getting nuclear weapons.

He slammed the US-Iran nuclear talks for endangering Israel and promised to terminate President Barack Obama’s order shielding many undocumented migrants from deportation.

The Democratic National Committee reacted with sarcasm before Trump even finished his 45-minute speech.

“He adds some much-needed seriousness that has previously been lacking from the GOP field, and we look forward to hearing more about his ideas for the nation,” said spokeswoman Holly Shulman.

The Donald, as he is popularly known, announced that he had a total net worth of more than $8.7 billion — double Forbes’ estimate of $4.1 billion — and said the election would be decided on competency.

“I’m not doing that to brag,” he said, waving a piece of paper with details of his fortune.

Trump vowed to rebuild infrastructure and create jobs, saying that US unemployment has risen sky high, even past 20 percent, challenging government figures that put it at under six percent.

“I will be the greatest jobs president that God ever created,” he promised. “I will bring back our jobs from China, from Mexico, from Japan, from so many places.”

Supported by his third wife Melania, a former model, and numerous children, some in the crowd broke into chants of: “We want Trump!”

“Our enemies are getting stronger and stronger by the day, and we as a country are getting weaker. Even our nuclear arsenal doesn’t work,” he said.