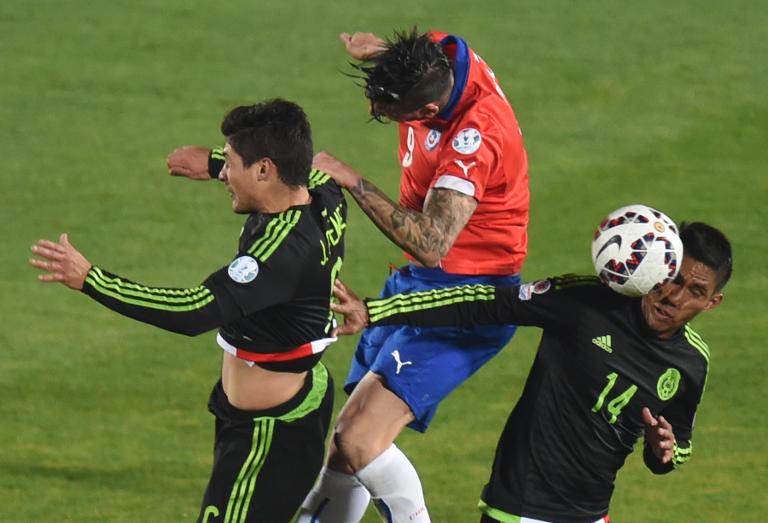 Mexico snatched a pulsating 3-3 draw with Chile while Bolivia downed Ecuador in a five-goal thriller as the Copa America laid on a feast of attacking football.

A dramatic day of action in Group A saw Bolivia secure their first win in the tournament in 18 years with a 3-2 victory over Ecuador in Valparaiso before an epic battle between Chile and Mexico in Santiago.

Chile, 2-0 winners over Ecuador in their opening game, looked to have booked their place in the quarter-finals after two goals from Juventus star Arturo Vidal helped them into a 3-2 lead.

But a 66th-minute equaliser from Vicente Vuoso, his second of the match, earned a share of the points for Mexico, who are one of two teams from outside South America invited to take part in this year’s tournament.

Vuoso had given Mexico the lead after only 21 minutes, tucking away Juan Carlos Medina’s cross after a sweeping counter-attack, only for Vidal to level a minute later with a thunderous header.

Chile again hit back rapidly however with Eduardo Vargas equalising shortly before the break.

Vidal then struck a 55th-minute penalty to put Chile ahead for the first time in the match, only for Vuoso to frustrate the home side with his second.

Chile had what looked like a legitimate Alexis Sanchez goal ruled out for offside with 10 minutes to go as Mexico survived a late onslaught to claim a share of the points.

Chile now top Group A on goal difference as they prepare to meet Bolivia in their final first round match on Friday.

Man-of-the-match Vidal said ‘La Roja’ would need to improve to be sure of winning the group.

“There are several things we need to improve if we want to beat Bolivia, but the important thing is we improved on our performance from the first match today,” Vidal said.

“It’s nice to be scoring goals for the team, but the most important thing is our objective to be champions,” he added.

Bolivia, who have a formidable record when playing at home in the thin air of La Paz, secured their first victory on foreign soil in a competitive match in 20 years when they beat Ecuador earlier Monday.

The win was also Bolivia’s first in the Copa America since 1997, and means they are now firmly in contention to qualify for the second round.

Bolivia assured themselves of victory in the opening 45 minutes, punishing a series of mistakes by Ecuador to race into a 3-0 lead.

Smedberg-Dalence turned goalscorer in the 18th minute to put Bolivia 2-0 up, curling home a superb shot from the edge of the area.

A bizarre sequence of events ultimately saw Bolivia go 3-0 up. Enner Valencia was awarded a dubious penalty for Ecuador which he duly converted before being ordered to take it again after Miller Bolanos encroached in the area.

Bolivia goalkeeper Romel Quinonez then saved the second attempt and moments later the tables were turned on Ecuador when Frickson Erazo conceded a spot-kick for a rash high boot on Damian Lizio.

China-based striker Marcelo Martins stepped up to make it 3-0.

There appeared to be no way back for Ecuador but Valencia struck early in the second half to give his side hope and Bolanos lashed in a stunning 25-yard effort on 81 minutes to set up a frantic finale.

But Bolivia keeper Quinonez was equal to the onslaught as the minnows held on for a famous win.