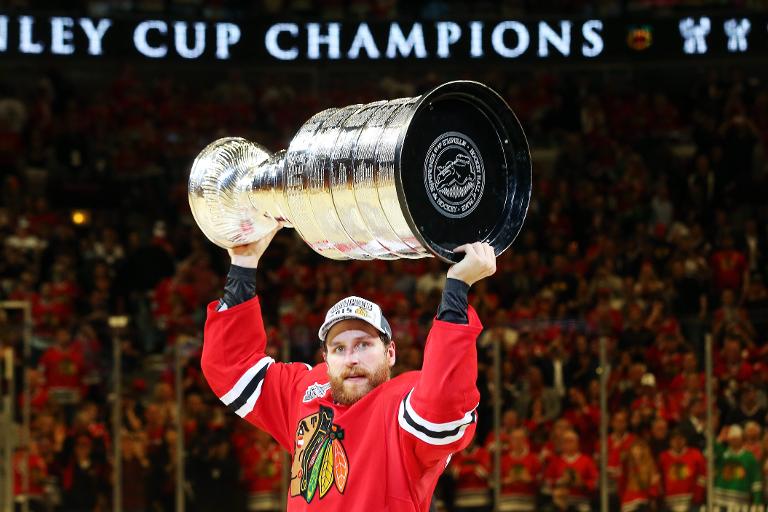 Duncan Keith scored the eventual winner as the Chicago Blackhawks clinched their first Stanley Cup title on home ice in almost eight decades with a 2-0 victory over the Tampa Bay Lightning on Monday.

Defenseman Keith fired his own rebound into the back of the net to give the Blackhawks a 1-0 lead late in the second as Chicago won the series 4-2 for their third NHL championship in six seasons.

“It feels so good to be a part of a group of guys willing to do whatever it takes,” Keith said. “It is awesome. We did it at home. It is special to win it, but to do it in front of our home fans is so much fun now.”

Corey Crawford made 25 saves to earn the shutout and Patrick Kane got the insurance marker in the third period for Chicago, who won one of the most closely contested finals in league history as game six was the first contest that saw either club take a multi-goal lead.

The win touched off a wild celebration on the ice by the Blackhawks in front of their home crowd of 22,400 at United Center arena.

“It is unreal right now. I don’t want to leave the ice,” American Kane said. “Tonight was my night.”

Let’s not forget Keith as well. The 31-year-old Canadian was awarded the Conn Smythe Trophy as the most valuable player of the 2015 NHL playoffs.

Keith crossed over the Lightning blueline and took a shot after receiving a pass from Kane. Keith continued on to the net and collected his own rebound before lifting the puck over the glove of Lightning goaltender Ben Bishop with just under three minutes left in the second period.

The Blackhawks claimed their first title at home in 77 years. They won in 2010 in Philadelphia and capped their 2013 championship run on the road in Boston.

The Black Hawks last celebrated a Cup victory at home in 1938 when they swept the Toronto Maple Leafs in four straight games.

Since then, they have had just one chance to win at home and that was back in 1971 when the Montreal Canadiens beat them four games to three after Chicago lost the final two games including game seven at Chicago Stadium.

Kane finished with a goal and an assist Monday after having a quiet finals series heading into game six. Former Lightning Brad Richards faked a shot before passing cross ice to Kane, who dropped to one knee and one-timed the slapshot past Bishop. It was Kane’s 11th goal of the postseason.

Kane said he felt frustrated by all-star Swedish defenseman Victor Hedman who bottled him up throughout the first five games of the series.

“Give them credit,” he said of the Lightning. “Hedman had me frustrated and talking to myself.”

The Lightning were a banged-up team but the extent of their injuries wasn’t revealed until after the series was over, when the club said Bishop had been playing the last few games with a torn left groin.

They also announced forward Tyler Johnson, who led the league in playoff scoring with 13 goals, was playing with a broken right wrist. Johnson had stopped taking faceoffs in the last few games because of the fracture.

This marked the third Stanley Cup ring for Hawks forward Marian Hossa, who lauded the veterans on the team for setting a winning example.

Hossa has been to five Stanley Cup finals in his career but was unable to break through until he joined the Blackhawks. In his first two finals he failed to win in Detroit and Pittsburgh.

“What a journey to win three Cups in six years,” the 36-year-old Slovakian forward said. “I don’t believe it.