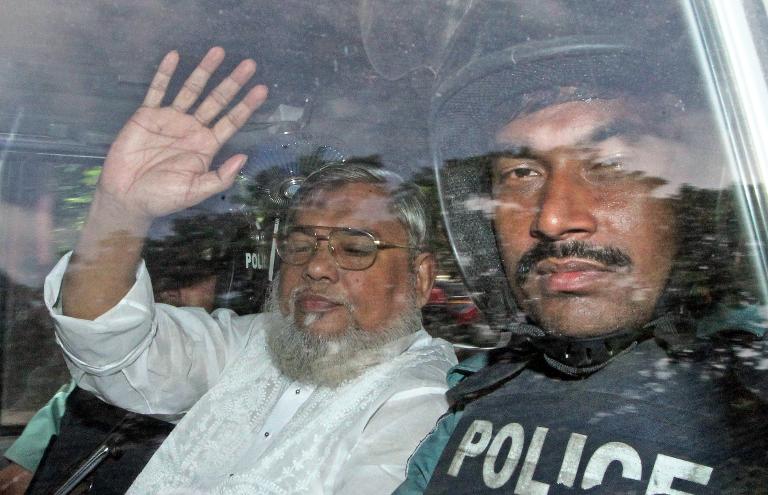 A top Bangladesh Islamist leader could be executed within months after the Supreme Court Tuesday upheld his death sentence for war crimes during the country’s 1971 battle for independence against Pakistan.

Chief Justice S.K. Sinha dismissed Ali Ahsan Mohammad Mujahid’s appeal against hanging for one count of murder, while commuting his death sentence for torture and a charge of “extermination” of intellectuals in the war.

“Souls of the war martyrs can finally now rest in peace after today’s verdict,” prosecutor Mokhlesur Rahman Badal told AFP outside the court.

Security was tight ahead of Tuesday’s ruling, with heavily armed police and border guards surrounding the court in Dhaka and patrolling nearby streets.

The 67-year-old is one of about a dozen leaders of Bangladesh’s largest Islamist party, Jamaat-e-Islami, a key opposition group, convicted by a controversial war crimes tribunal set up by the secular government in 2010.

The convictions have triggered the country’s deadliest violence since independence with some 500 people killed, mainly in clashes between protesters and police.

Jamaat was expected to call a strike to protest Tuesday’s ruling, but widespread violence by its activists was unlikely following a recent crackdown against the opposition by Prime Minister Sheikh Hasina’s government.

Mujahid was found guilty in 2013 of leading Al Badr, a notorious pro-Pakistani militia that carried out killings of top Bangladeshi writers, journalists and professors towards the end of the nine-month war.

Prosecutors said Mujahid, Jamaat’s general secretary, now faces the gallows within months unless his case is reviewed by the same court or he is granted clemency by the president.

But the court has swiftly dismissed previous reviews of two other senior Jamaat officials on death row, leading to their execution, the latest in April this year.

Those leaders also declined to seek clemency from the president, saying they did not recognise Hasina’s government.

When it became clear that Pakistan was losing the war, dozens of intellectuals were abducted from their homes and murdered in December 1971 in the most gruesome chapter of the conflict.

Their bodies were found blindfolded with their hands tied and dumped in a marsh on the outskirts of the capital.

Defence lawyers have said Mujahid’s name was not in the list of Al Badr commanders or activists that was published by the post-independence government.

“We’ll seek a review of the Supreme Court judgement,” defence lawyer Shishir Manir told AFP, adding they would make the appeal as soon as they get the full copy of the verdict.

The court’s ruling is a blow to the beleaguered opposition, thousands of whose leaders and supporters have been detained as part of the Hasina government’s crackdown in recent months.

The government has been attempting to end an opposition campaign to force Hasina to resign and call fresh elections. The campaign has left scores dead mainly in fire bomb attacks by opposition activists.

The trials have divided the country with the opposition and Jamaat branding them a sham aimed at eliminating their leaders rather than meting out justice. Secularists have demanded the execution of all those accused.

Mujahid was a senior minister from 2001-2006 in a previous government led by then prime minister Khaleda Zia. He was an influential leader in the opposition alliance until his arrest in 2011.

International rights groups, legal experts and the opposition have criticised the tribunal, saying its procedures fall short of international standards.

Hasina has rejected any criticism of the International Crimes Tribunal’s trials, saying they were needed to heal the wounds of the war. Bangladesh says three million people died but independent estimates put the toll much lower.