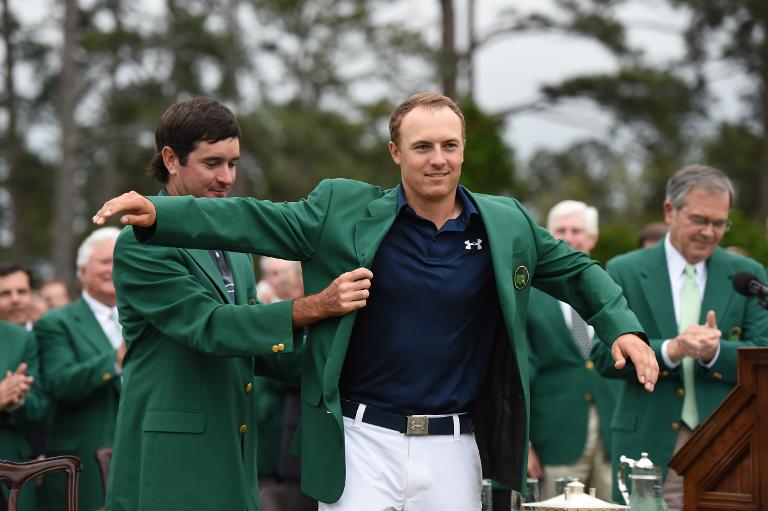 Masters champ Jordan Spieth enjoys slipping on his green jacket while watching television around the house, but he says winning the first Grand Slam of his career isn’t going to change who he is.

The 21-year-old American showed he can shine on the brightest stage at The Masters in April, rolling to a record-setting triumph after being runner-up in 2014.

“I put it on last week,” Spieth said Monday of the jacket which traditionally goes to the winner of the first major of the season.

“Why? Just to make sure it was still in the case. No, I was just watching TV and wanted to slip it on, just kind of felt like it.

“Why wouldn’t I put it on, to be honest with you?”

Spieth became the second youngest Masters champion behind Tiger Woods and the first player since Raymond Floyd in 1976 to post a wire-to-wire victory.

Spieth is seeking another Grand Slam win this week at the 115th US Open which begins Thursday at the par 70 Chambers Bay course in the US Pacific Northwest.

Spieth has played 16 PGA Tour events this season and along with his two victories he has three runner-ups and nine top ten finishes.

The Texan is the most promising American at his age since Woods, but you can’t tell that from talking to him. Winning the Masters isn’t going to make him complacent or give him a big head and don’t even think about calling him the next great American hope.

“I don’t put a title on myself as the American guy,” he said, following his practice round at Chambers Bay on Monday. “I don’t think much of titles. I just try and work towards the next goal.

“I don’t look at myself or my game much differently since The Masters.

“It was a life-changing event for me off the course. On the course, when I get inside the ropes, I don’t feel any different.

“And I’ve got another goal. My goal this week is to give myself a chance to win again and see if we can duplicate what we did two months ago.”

While Chambers Bay will be a mystery to all but a handful of the players, Spieth does have an ace up his sleeve — his caddie, Michael Greller, is from the Tacoma, Washington area and worked at Chambers Bay before carrying Spieth’s bag on the PGA Tour.

“I feel like if there’s any advantage, it would be towards us with his knowledge of the place,” Spieth said of Greller.

“It’s going to help driving the ball, sight lines and understanding when things get firm he’s going to know where it would run off to a little better.

“Off the tee it’s really going to help. Into greens, I don’t think he’s seen where the pins are going to be and he’s certainly hasn’t seen the greens the way we’re going to play them this weekend. So we’re going to have to adapt to that.”

Spieth played a couple of practice rounds so far and likes what he sees but agrees with most that Chambers Bay is a sturdy test.

“I was kind of going in with a blank slate, learning from Michael,” he said. “I got two really good solid rounds in. I really enjoy the layout. I think it’s going to be a fun challenge … might be slower rounds of golf, given the size of the greens and the difficulty of the course.”

Spieth said he feels good about his first half of the season and is ready to make it even better in the second half.

“There are certainly a lot of goals left for the year. It’s never even crossed my mind to let it kind of sink in that it’s been a great year, and that it would be a great year at the end.

“If I didn’t do anything the rest of the year, I’d be pretty frustrated at the second half.