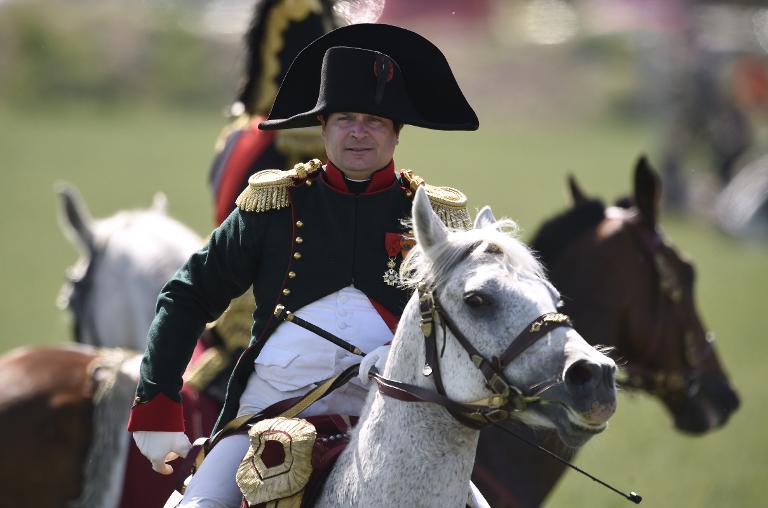 Two hundred years after the Battle of Waterloo, Napoleon is still under attack in Britain, where the image persists of a military genius consumed by a fanaticism comparable with Hitler or Stalin.

The emperor of French revolutionaries and regicides continues to strike fear in his neighbours across the Channel, long after his death on the South Atlantic island of St Helena, according to British historian and author Andrew Roberts.

“Mothers used to quieten their children with the threat that if you don’t watch out, Boney will get you,” he told AFP.

“There were still children in the 1950s being scared by this particular threat.”

Indeed, the title of his latest 900-page biography — “Napoleon, the Great” — raised more than the odd eyebrow.

Firstly, most Britons would argue that “the Great” was not a fitting epitaph for “little Boney”, who is still ridiculed for his small size and lust for war.

For good measure, Channel 4 recently revealed in a documentary that the imperial penis “reached 1.5 inches” or 3.8 centimetres.

“He was also very unlucky that he came to power at the same time as the greatest political caricaturists that the British ever created — James Gillray and Thomas Rowlandson,” said Roberts.

“They always made him, somehow, to be small like a dwarf but also completely bloodthirsty.”

Their drawings depicting “the Lilliputian”, “the Corsican plague” and “Beelzebub” recently went on display at an exhibition in London’s British Museum.

“Because you were frightened of him, you had to belittle him, make him seem not so frightening,” added Sheila O’Connell, curator of the exhibition.

“Unfortunately, the British do have a very old-fashioned view of Napoleon, one that was created by the propaganda of the Napoleonic wars,” said Roberts.

Since then, the conservative image of Napoleon as “a monster and an evil dictator” has stuck, with the notable exception of great wartime leader Winston Churchill, who described him as “the greatest action man since Julius Caesar”.

“He was a conqueror,” added Roberts. “Of course he was ruthless. However, all of these things must be seen in the context of a total war, one that lasted 22 years.”

“To blame him… for all the wars that took place and killed so many people in Europe, about six million people, I think is totally unfair.”

Faced with colleagues such as historian Adam Zamoyski, for whom Napoleon was “megalomaniac, incompetent and a usurper”, Roberts argued that his hero was as much the victim of aggression as the perpetrator.

The British, Austrians and Prussians launched the first war against revolutionary France in 1792, when Napoleon “was still a second lieutenant of artillery”.

However, he could be blamed for “the appallingly opportunist attack in the peninsula against Spain and Portugal in 1807 and 1808 and, of course, the invasion of Russia.”

His overall military record — despite his crushing and decisive defeat at Waterloo on June 18, 1815 — stands at 47 victories and seven “ties” in 60 battles.

The debate over whether he was a tyrant or hero has provided fodder for thousands of books, cluttering the shelves of British libraries and online shopping sites.

With so much detailed analysis in the public domain, historian Roberts is perplexed that Napoleon can still be compared to Saddam Hussein and Moamer Kadhafi or Adolf Hitler and Joseph Stalin, as in a recent BBC documentary.

“These men had absolutely nothing in common, except that Napoleon tried to invade Russia and so did Hitler,” he said.

“Not only was he a fine soldier, and a brilliant strategist, but of course he was a head of state. He was altogether a much larger figure than Wellington,” said Evelyn Webb-Carter, president of Waterloo 200, which is organising the bicentennial commemorations on the British side.

“People who visit the battlefield at Waterloo notice that the shops, restaurants and the cafes are very much concentrated on Napoleon, who lost, rather than Wellington, who won,” added Roberts.

“That does irritate the Englishman rather a lot, especially the English tourist.”

The London media are also stoking the embers, accusing the losers of being deluded.

The Daily Telegraph ran with the headline “French rewrite Battle of Waterloo to cast Napoleon as the victor” after Frank Samson, who will play Napoleon during the battle reconstruction, said: “In terms of his historical importance, it’s clear that he won at Waterloo.”

Even Michael Haynes, one of the English extras at the battle site, in modern-day Belgium, treacherously confesses to having “a little bit of love for Napoleon”.

“Even though he was a little bit of a tyrant, he was a great general.”