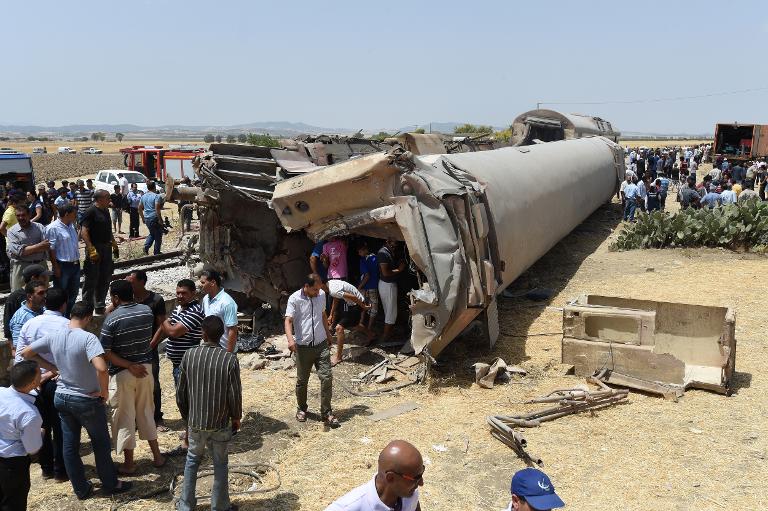 At least 17 people were killed and 70 injured when a rush hour passenger train hit a lorry and derailed at an unmarked crossing south of Tunis Tuesday morning, officials said.

Most of the dead were passengers on the train, which hit the lorry around 60 kilometres (40 miles) south of the capital, the transport ministry said.

“The toll is currently 17 dead and around 70 injured,” Mongi Khadhi, a spokesman for the emergency services told AFP.

An initial report had put the number killed at 14.

The interior ministry said the train was en route to Tunis from Gaafour, 120 kilometres to the southwest.

Transport Minister Mahmoud Ben Romdhane, who initially blamed both the train and lorry driver for going too fast, said the accident happened because there was no barrier at the crossing.

“The main cause of the accident is the non-existence of a barrier… and protection at the crossing,” he told radio Shems-FM.

“In Tunisia, there are 1,150 rail crossings. Only 250 are equipped with signal posts and barriers and only 150 have lights. This is insufficient.”

An AFP journalist confirmed that there were no markings at the crossing, near the village of Tabika.

Train crashes are common in Tunisia, where much of the rail network is dilapidated, but Tuesday’s accident was the deadliest in recent memory.

The presidency said it had called for an inquiry “to determine the cause of this catastrophe.”

The injured were taken to hospitals in El Fahes and Zaghouan, and the scene of the accident was visited by the interior and health ministers.

Witnesses spoke of mangled wreckage at the scene and dead bodies strewn across the tracks.

“A very loud noise woke me up. At first I thought it was an earthquake but then I saw this overturned truck and the bodies. Two bodies had their legs ripped off,” local resident Habib Fayedh told AFP.

The lorry driver, originally reported to have been killed, survived the collision and was questioned by police before being taken to hospital, Fayedh said.

“He was alive but had head injuries. He didn’t remember the crash.”

Another witness described how bodies had been trapped under one of the carriages, which had overturned on impact.

“This is horrible; there is blood and bits of flesh everywhere,” one witness told Shems-FM radio.

Witnesses said some victims were thrown from the open doors of the train as it ploughed into the lorry.

Blood stains, bits of clothing and abandoned footwear left by passengers could be seen on board the train itself.

One resident said Tuesday’s crash was not the first accident to happen at the Tabika crossing, and also blaming a lack of barriers for the collision.

In July, a train derailed in the country’s northwest, killing five people and injuring around 40.