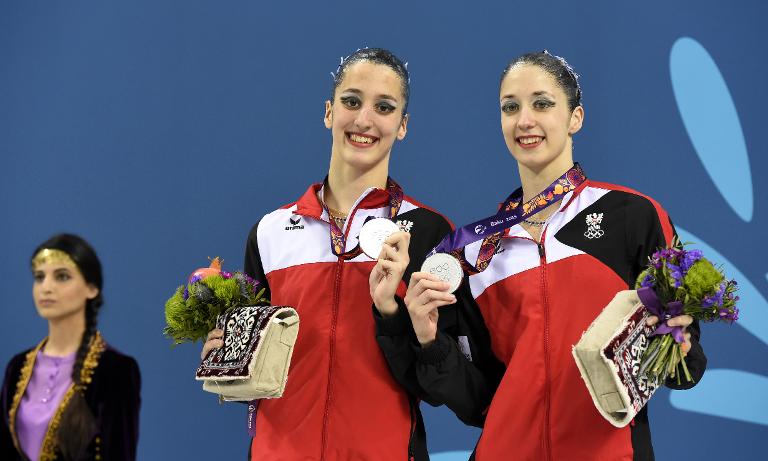 Tears flowed at the European Games on Monday when twins Anna-Maria and Eirini-Marina Alexandri dedicated their silver medal to Austrian team-mate Vanessa Sahinovic who is in a coma in hospital in Vienna after being run over by a bus on the eve of the Games in Baku.

Sahinovic, 15, was placed in an artificial coma after being flown back from Baku and undergoing a lengthy operation last Thursday. Another of her synchronised swimming team-mates, Luna Pjaer, broke her arm in the incident and also returned to Vienna whilst a third Verena Breit suffered bruising but stayed on in the Azeri capital.

Sahinovic has spinal, hip and thigh injuries and is expected to undergo further operations.

“This is for Vanessa,” said the Alexandri sisters brandishing the silver medals after the synchronised swimming duets competition.

The 17-year-old sisters, along with their triplet and team reserve Vasiliki-Pagona — the eldest by a minute — burst into tears and hugged their coaches after moving up from third to second in the final part of the programme.

The medal justified their decision to not pull out of the competition following the accident after it had been discussed by the team and coaches.

“It has been really tough since the accident. We received messages from all round the world,” said Eirni-Marina.

“Verena had an injured leg but she is very tough and she wanted to be here for Vanessa and Luna.

“We weren’t thinking of silver. It is a huge surprise for us.

“We tried to put the incident to the back of our minds. It was especially difficult in the qualifiers.

“Now we are really moved and really proud.”

Breit went through with competing in the qualifiers despite the mental scars and suffering a badly bruised thigh.

“It was very brave of her to swim but she wanted to do it for Vanessa and Luna,” said Anna-Maria Alexandri.

“She felt pain in her leg but she did figures and competed in the combination.”

One of their coaches, Bulgarian Albena Mladenova, said their achievement had restored some of the joy the team had lost in the past few days.

“I’m very proud of them. What they have done is amazing, remarkable. I think they have helped put a smile back after some bad days,” said Mladenova.

The incident is presently under investigation by the police — the images captured on camera show the bus travelling at speed and taking a corner with the girls and their companions in clear sight and then hitting them with one being dragged for 20 metres under the vehicle.

As a result of the incident the Games organisers announced on Sunday they had implemented new safety measures vis-a-vis transport.