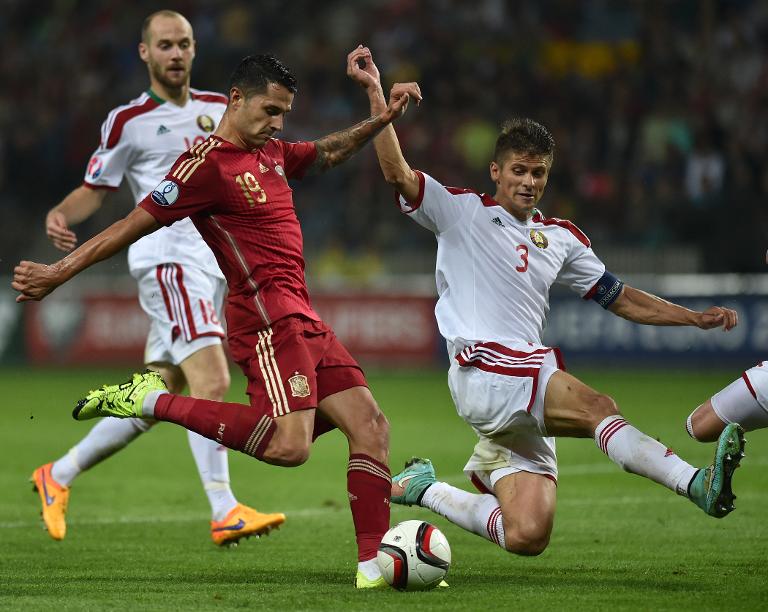 Reigning European champions Spain closed in on a place at Euro 2016 by grinding out a 1-0 qualifying win over Belarus on Sunday as Wayne Rooney’s late goal gave England victory in Slovenia.

Zlatan Ibrahimovic struck a brace as Sweden beat Montenegro but Russia were the day’s big losers, a defeat to Austria coming as a blow to their prospects of reaching the finals in France in a year’s time.

England are on a fast track to Euro 2016 having won six games out of six in qualifying Group E, although they needed an 86th-minute winner from Rooney to secure victory in Ljubljana.

Milivoje Novakovic gave Slovenia the lead in the 37th minute at the Stozice Stadium before Jack Wilshere broke his international duck with a pair of brilliant, almost identical second-half goals to put England ahead.

Slovenia substitute Nejc Pecnik appeared to have rescued a point with an 84th-minute equaliser, but moments later Rooney atoned for two glaring earlier misses by scoring his 48th England goal, taking him level with Gary Lineker and leaving him one goal behind all-time leading scorer Bobby Charlton.

“It’s great to score the winner, but it was a great team performance,” captain Rooney told ITV.

England are six points clear at the top of the section from Switzerland, who came from behind to beat Lithuania 2-1 in Vilnius.

Fiodor Cernych put the home side ahead in the second half but Josip Drmic equalised soon after for the Swiss before Xherdan Shaqiri of Inter Milan got the winning goal six minutes from time.

In the group’s other game, Sergei Zenjov scored two goals either side of half-time as Estonia defeated minnows San Marino — England’s next opponents in September — 2-0 in Tallinn.

Meanwhile, Euro 2008 and Euro 2012 winners Spain made it five victories from six games in Group C by beating Belarus 1-0 at the Borisov Arena in Barysaw.

Manchester City’s David Silva got the only goal of the game in Vicente del Bosque’s 100th match in charge of La Roja, controlling a Cesc Fabregas free-kick at the back post and volleying in.

It is Slovakia who top the section, however, after they made it six wins out of six by downing Macedonia 2-1 in Zilina.

Kornel Salata and Napoli star Marek Hamsik scored for the Slovaks, with Arijan Ademi getting one back for the visitors, who had forward Feran Hasani sent off late on.

Spain and Slovakia meet in early September, while third-placed Ukraine are not out of the running after second-half goals from Artem Kravets, Denys Garmash and the excellent Yevhen Konoplyanka secured a 3-0 win over Luxembourg in Lviv.

In Group G, Russia’s hopes of qualifying were dealt a blow as Fabio Capello’s side slumped to a 1-0 defeat at home to Austria.

Giant striker Marc Janko scored the only goal of the game for the Austrians with a spectacular overhead kick in the 33rd minute at Spartak Moscow’s Otkrytie Arena as they extended their lead at the top of the section.

After six games, unbeaten Austria — whose only previous European Championship appearance came as co-hosts in 2008 — are top with 16 points, four points clear of Sweden, with Russia a further four points adrift in third, which is likely to bring with it a play-off place.

Fabio Capello, the coach of the 2018 World Cup hosts, seemed to blame his team’s performance on the “pedestrian” pace of the game in Russia.

“It’s very hard to play at top speed because my players haven’t got into the habit of doing so in Russian Premier League matches,” said the 68-year-old Italian.

“After the pedestrian football which they play in the domestic league it’s impossible to meet the requirements of European football, where everybody plays much faster.”

Sweden won 3-1 at home to Montenegro with Marcus Berg opening the scoring before skipper Ibrahimovic, of Paris Saint-Germain, netted twice in four minutes just before half-time, with Dejan Damjanovic hitting a penalty consolation for the away side.

Also in Group G, Liechtenstein and Moldova drew 1-1 with Sandro Wieser’s brilliant strike putting the hosts ahead in Vaduz before Gheorghe Boghiu levelled.