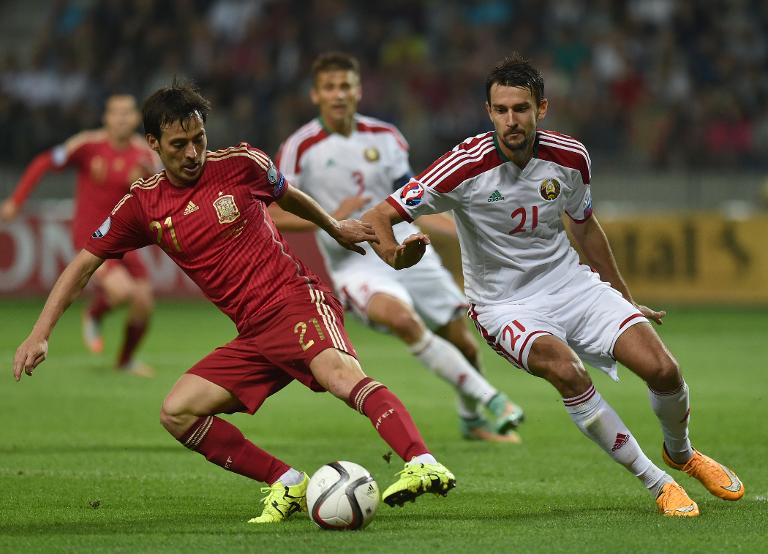 A solitary first-half strike by David Silva was enough for reigning European champions Spain to win 1-0 in Belarus in Euro 2016 qualifying on Sunday in coach Vicente del Bosque’s 100th game in charge.

The Manchester City star struck on the stroke of half-time at the Borisov Arena in Barysaw to give the Euro 2008 and Euro 2012 winners a fifth win in six qualifiers in Group C as they close in on a place at next year’s tournament in France.

Spain remain second in the group, three points behind leaders Slovakia, who maintained their perfect record by defeating Macedonia 2-1.

More importantly, La Roja remain three points better off than third-placed Ukraine, who were 3-0 winners at home to Luxembourg earlier in the day.

One year and one day after their infamous 5-1 defeat to the Netherlands at the World Cup in Brazil, this was a potential banana skin of a fixture for the Spanish with the home-based players in the Belarus squad in the middle of their domestic season.

Del Bosque’s players could be forgiven for feeling the effects of a long campaign as their summer holidays beckoned but they got the job done thanks to Silva’s goal just before the break.

When goalkeeper Andrei Gorbunov came for and missed a Cesc Fabregas free-kick delivery from the visitors’ left, Silva controlled the ball and volleyed in his 23rd international goal to equal Alfredo di Stefano’s tally for Spain.

Belarus, who have just four points so far, were never out of the contest and Maksim Volodko had an effort disallowed for offside early in the second half before Maksim Bordachev sliced a great chance wide.

At the other end Arsenal midfielder Santi Cazorla tested Gorbunov with a stinging low strike that the ‘keeper kept out with a firm left hand as the one goal proved enough.

Spain are next in action in September with a double-header at home to Slovakia and away to Macedonia.