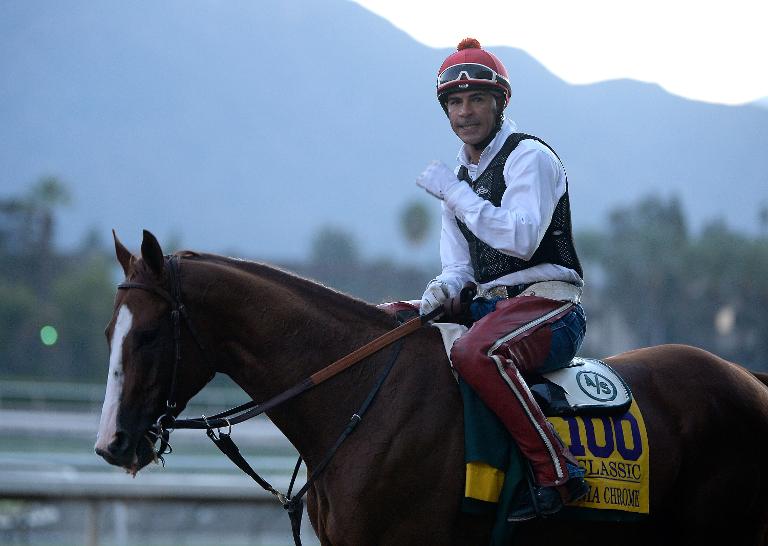 An international equine cast every bit as glittering as the attendant fashion has gathered for the annual extravaganza at Royal Ascot, which starts on Tuesday.

Champion racehorses from Australia and Hong Kong and up to 12 runners from the United States — among them 2014 Horse of the Year California Chrome — will lock horns with Europeâ€™s finest over five days at the royal racecourse in Berkshire.

That race makes a perfect vignette of why Royal Ascot is seen as the premier race meeting in the world.

Opposing California Chrome are Spielberg, from Japan, and Criterion, the Australian challenger who landed the prestigious Queen Elizabeth Stakes at Randwick racecourse, Sydney, in April.

However, the international contingent faces strong European competition, notably from Free Eagle, who is trained in Ireland by Dermot Weld.

In Forgotten Rules, Weld also trains the favourite for the meetingâ€™s showpiece race, the Ascot Gold Cup, on Thursday.

But that horse’s participation will only be confirmed after Weld walks the course to ensure ground conditions are not too fast for his unbeaten five-year-old.

The most likely prospect of a winner trained outside Europe rests with Hong Kong’s Able Friend, feted at the end of last year as the best horse in the world over 1600m, and the trio of Australian sprinters from a nation that has already won six races at Royal Ascot.

Trained by John Moore, Able Friend bids to get the meeting off to an explosive start in the Â£375,000 Queen Anne Stakes, the opening race on Tuesday.

The winner of more than Â£4 million in his 18 starts to date, Able Friend is up against Solow, the formidable French horse that won the Dubai Turf in the Middle Eastern emirate in March.

â€œHeâ€™s the best in Hong Kong and the best horse I have ever trained,â€ Moore said of Able Friend.

â€œNow he must prove himself on the international stage, and Royal Ascot is the premier race meeting on the planet.â€

Shamal Wind, trained by Robert Smerdon, approaches Tuesday’s race on the back of a comfortable victory in the Oakleigh Plate over 1100m at Caulfield racecourse in February.

But British bookmakers believe his compatriot, Brazen Beau, has better prospects of winning the Diamond Jubilee Stakes on Saturday.

Trained by Chris Waller, Brazen Beau also won on his last domestic start before making the journey to Ascot — in his case the prestigious Newmarket Handicap at Flemington racecourse, in Melbourne.

Brazen Beau is the favourite to win the Diamond Jubilee Stakes, which also features Wandjima, from the renowned Australian stable of Gai Waterhouse.

However, Australia’s challenge unfolds against the backdrop of a spate of positive tests returned by horses for the prohibited substance, cobalt.

“It has put a cloud over Australian racing,” Smerdon admitted — although none of Australiaâ€™s four Royal Ascot runners is implicated.

Each of them was tested by the racing authorities on their arrival in Britain under the terms of a stringent, new anti-doping policy introduced earlier this year.

Peter Moody is among a raft Australian trainers being investigated for cobalt use.

As has become custom, Britain’s Queen Elizabeth, is expected to attend Royal Ascot on all five days.

Among horses scheduled to carry the royal silks is Ring Of Truth in the Â£100,000 Queen Mary Stakes on Wednesday.

The highlight from a European perspective is Gleneagles’s bid to follow up victories in the 2,000 Guineas and its Irish equivalent when he contests the Â£375,000 St Jamesâ€™s Palace Stakes on Tuesday.

Gleneagles is trained in Ireland by Aidan Oâ€™Brien. He will be ridden by Ryan Moore, who is strongly favoured by British bookmakers to lead all jockeys by number of winners at the close the five-day meeting.