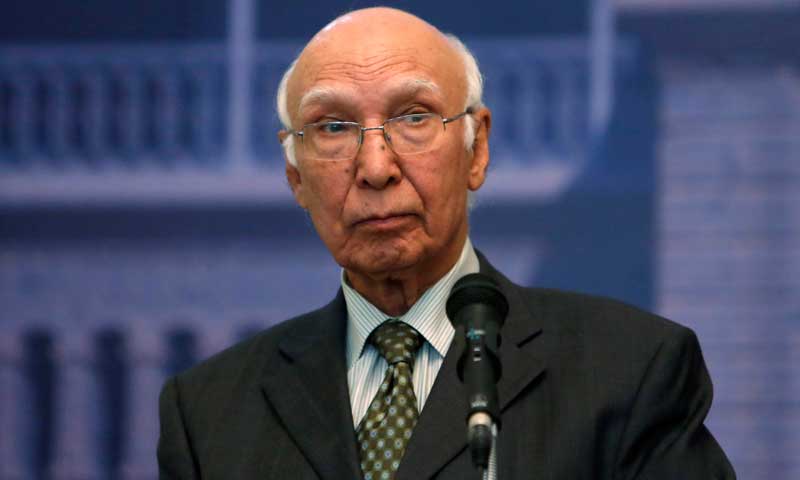 Islamabad: Continuing the war of words, Pakistan on Monday said it will not hold talks with India on “Indian terms” and ruled out any dialogue if the agenda does not include “Kashmir and water issues”.

Pakistan will not be part of any dialogue process that is based on “Indian terms” and no dialogue would be held with India until “Kashmir and water issues” were part of it, Pakistan Prime Minister’s Advisor on Foreign Affairs, Sartaj Aziz said.

He also said that his country will take up the issue of “anti-Pakistan” statements made by Indian leaders with UN Secretary General Ban Ki-Moon.

Aziz made the remarks while talking to the media here after the inauguration of the 10th meeting of heads of the Higher Education Commission of SAARC nations.

However, Aziz, also struck a conciliatory note, saying Pakistan wants tension-free relations with India even if cordial ties were not possible.

Earlier, addressing the education experts of SAARC countries, Aziz was quoted by Radio Pakistan as saying that Pakistan is a peace loving country and stands by its position to resolve all outstanding issues with India through dialogue.

He said Pakistan desires to resume dialogue with India with particular focus on resolving Kashmir and water issues.

Aziz said Pakistan will also raise these issues on the platform of Organisation of Islamic Cooperation (OIC) meeting to be held in Jeddah on Tuesday.

Pakistan and India have been involved in a war of words recently with leaders from both sides exchanging sharp comments.

Pakistan Prime Minister Nawaz Sharif last week attacked the “irresponsible and imprudent” statements from the Indian political leadership and had vowed to protect his country’s “vital interests at all costs”.

Also, both the Houses of Pakistan’s Parliament, the Senate and the National Assembly, had unanimously passed resolutions condemning the remarks of Indian leaders.

Minister of State for Information and Broadcasting Rajyavardhan Singh Rathore had said in the wake of the military action in Myanmar that it was a message to other countries which was interpreted as a warning to Pakistan.

Pakistan had also described as “unfortunate” the remarks made by Prime Minister Narendra Modi during his recent visit to Dhaka where he had accused it of creating “nuisance” and constantly troubling India by promoting terrorism.