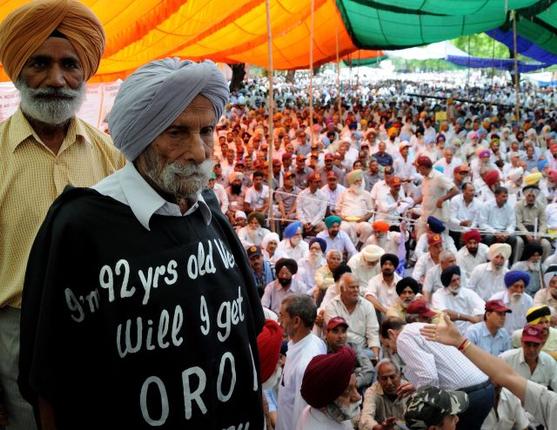 New Delhi:Â After holding protests across the country over the delay in implementation of One Rank One Pension, ex-servicemen will go on a relay hunger strike from Monday. Veterans have been demanding that Prime Minister Narendra Modi must fulfil his promise made a year back on it.

In order to build up pressure on the government, veterans also signed the petition in blood and it will be presented to both the President and the Prime Minister.

The protests came after rounds of talks — both formal and back- channel — with the government failed as the ex-servicemen were not given a specific timeline for the implementation of the long-pending OROP.

In Jaipur, Defence Minister Manohar Parrikar today sought to assuage their concerns, saying the promises made will be kept and that they should be “patient”.

“I assure you whatever we have promised that all would be done… but some people need to be patient,” Parrikar said addressing a conference on challenges and solutions regarding border safety.

Close to 22 lakh ex-servicemen and over six lakh war widows stand to be the immediate beneficiaries of the scheme which envisages uniform pension for the defence personnel retiring in the same rank with the same length of service, irrespective of their date of retirement.”

Currently, the pension for retired personnel is based on the Pay Commission recommendations at the time when he or she retired. So, a Major General who retired in 1996 draws less pension than a Lieutenant Colonel who retired after 1996. The ex-Defence personnel said this policy was “lopsided” and needed to be rectified.

Prime Minister Narendra Modi has assured us that it will be implemented, but it has been one year,” said Col. (retired) Anil Kaul, the media advisor to Indian Ex-Servicemen Movement (IESM) at a rally in Jantar Mantar in the national capital.

The ex-servicemen maintained that they were not against any government but are pressing to get their long-pending dues. They also said that they have sought an appointment with President Pranab Mukherjee to take up this matter.

The Modi government has said that it is committed to OROP, one of its key poll promises, but has been unable to implement it till now, they said.

Even though the government has said it is committed to implementing OROP, there has been no official word on why the scheme is getting delayed, they said.

Defence ministry sources said that the OROP file is with the Finance Ministry for a final budgetary approval.

Meanwhile, a group of ex-servicemen considered to be close to the RSS, wrote over the weekend to Finance Minister Arun Jaitley seeking the implementation of OROP so as to not “breach the trust” lakhs of retired soldiers.

In an open letter, it also sought that a definite date be declared for the implementation of OROP.

“The ex-servicemen across the country felt that finally here was a political party that is friendly and empathetic towards the cause of a soldier. As a result, most of us went all out to campaign for the BJP throughout India,” Lt General (retired) VM Patil, president of the Parishad, said in the letter.