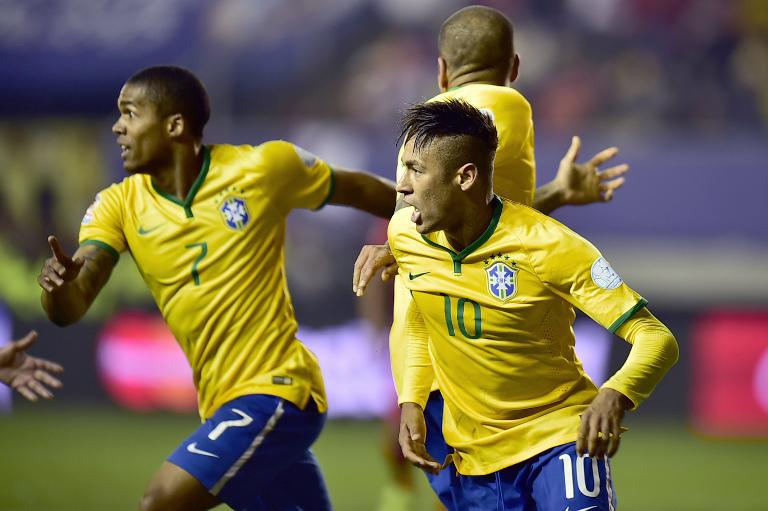 Brazil captain Neymar scored once and set up an injury-time winner as the five-time world champions scraped a 2-1 win over Peru on Sunday after Colombia suffered a shock defeat to Venezuela.

“This is a very tough competition,” Neymar said afterwards as he collected a man-of-the-match award. “We got the win and that’s important.”

Neymar has now reached 44 international goals at the age of 23, a year earlier than Brazilian legend Pele.

“I want to keep on reaching records, with goals, assists and everything that can help the team to win,” Neymar said.

The Brazilian star was at the centre of the action throughout the game, even getting a bizarre yellow card for pushing aside the foam the referee had sprayed on the pitch to show where a free kick should be taken.

Brazil coach Dunga praised the contribution of his captain.

“Neymar was again decisive,” Dunga said afterwards. “He’s played three finals in Spain (with Barcelona), and he’s had a long season. But he comes here and takes responsibility for sorting out our problems.”

Peru, who took the lead after only three minutes when Christian Cueva punished a defensive blunder by David Luiz, looked to have done enough to secure a share of the Group C points.

But with the final whistle looming, Neymar advanced menacingly down the left flank and threaded a pass through a forest of bodies for unmarked Shakhtar Donetsk striker Douglas Costa.

Douglas, who had earlier squandered a golden chance created by Neymar, made no mistake with his second opportunity, calmly placing his shot beyond the despairing dive of Pedro Gallese.

While Brazil can now start planning for the knockout rounds, Group C rivals Colombia must regroup after their upset defeat to Venezuela.

A second-half goal from Russian-based striker Salomon Rondon settled a hard-fought encounter in Rancagua as the highly-rated Colombians struggled to break down the Venezuelans.

Despite a starting line-up packed with star names from Europe’s strongest leagues, including James Rodriguez from Real Madrid, Manchester United’s Radamel Falcao and Chelsea’s Juan Cuadrado, Colombia were never able to impose their attacking style on the contest.

Juan Arango improvised a first-time cross across the box to Alejandro Guerra, who headed back into the path of Rondon.

The Zenit St. Petersburg striker, reportedly a summer transfer target for English clubs Tottenham and Liverpool, guided a superb header over Arsenal goalkeeper David Ospina before being mobbed by his team-mates.

Colombia rallied furiously in search of an equaliser but could find no way past Venezuelan goalkeeper Alain Baroja.

“We knew they were going to play hard,” said Colombia goalkeeper Ospina, who offered no excuses.

“Venezuela closed down the space well. We did not get the room for our individual skills. In the end we lost the game, but there are still two more left to turn this around.”

“Now we have to recover and start thinking about Brazil,” Ospina added.

Wednesday’s game against Brazil promises to be one of the ties of the first round, a rematch of the bruising quarter-final at last year’s World Cup, won 2-1 by the hosts.