Neymar to the rescue as Brazil down Peru | Newsmobile
Saturday, July 2, 2022

Home Sports Neymar to the rescue as Brazil down Peru 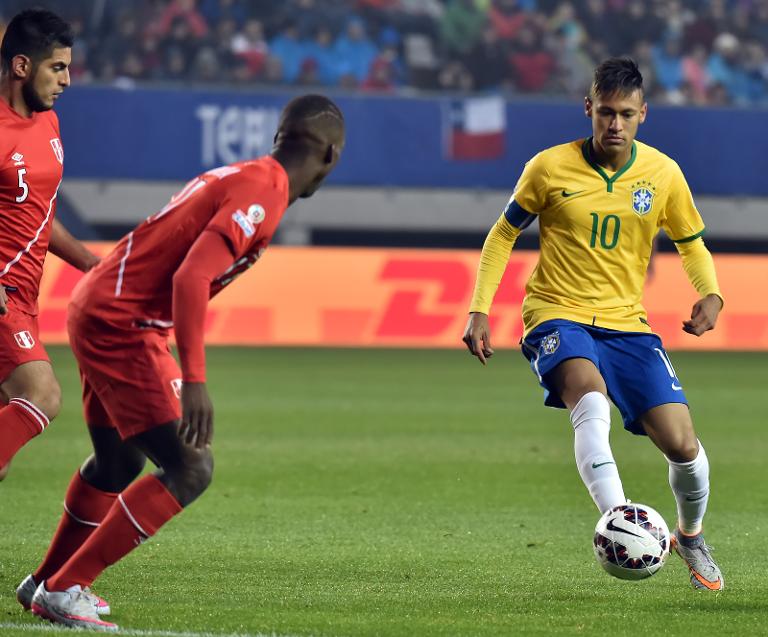 Brazil captain Neymar scored one goal and set up an injury-time winner as the five-time world champions opened their Copa America campaign with a desperate 2-1 win over Peru here Sunday.

Neymar nodded in a fifth-minute equaliser for the Brazilians — his 44th international goal at the age of just 23 — after Peru had taken a shock lead through Christian Cueva.

The Barcelona superstar appeared to be single-handedly trying to find a winner for the remainder of the match, invariably at the heart of Brazil’s best attacks.

It looked as if Peru had done enough to earn a share of the points in Group C as the match headed into injury time with the score locked at 1-1.

But with the final whistle looming, Neymar advanced menacingly down the left flank and threaded a pass through a forest of bodies for the unmarked Shakhtar Donetsk striker Douglas.

Douglas, who had earlier squandered a golden chance created by Neymar, made no mistake with his second opportunity, calmly placing his shot beyond the despairing dive of Pedro Gallese.

Brazil had entered the match on a run of 10 consecutive wins since their ill-fated World Cup campaign last year, when they were humiliated 7-1 by Germany in the semi-finals.

But Brazil’s hopes of extending their winning run to 11 matches were rocked within minutes of the start at a rain-lashed Estadio German Becker in Temuco when Peru took the lead through Cueva.

The Botafogo shot-stopper’s attempted clearance only went as far as Cueva, who rifled home from 10 yards to make it 1-0 after only three minutes.

Wing back Dani Alves picked up the ball wide on the right and curled an inviting cross into the area to pick out his unmarked Barcelona team-mate who headed home for 1-1.

Brazil enjoyed the better chances thereafter but struggled to carve out clear openings.

Neymar almost gave his side the lead in the 53rd minute, curling a shot from outside the box which cannoned back off the crossbar.

The striker was again at the center of things late in the game, breaking clear from deep inside his own half and releasing substitute Douglas.

Douglas’s attempt to lift his finish above the advancing goalkeeper drifted wide however. But the 24-year-old Ukraine-based striker made no mistake when given a second chance in injury-time as Brazil snatched the win.