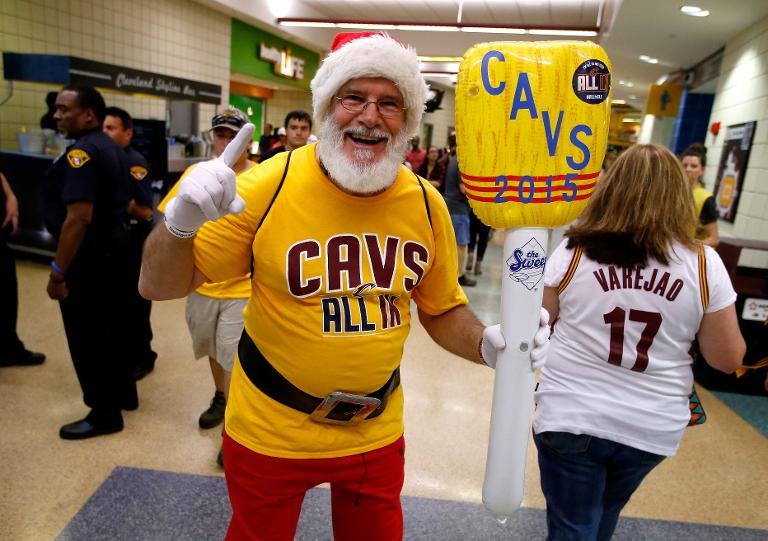 Cleveland sports fans have suffered so much heartache in 51 years without a champion that the most painful moments have their own names: The Shot, The Drive and The Fumble.

Now the Cleveland Cavaliers are on the verge of adding another chapter to that legacy of frustration as they face a must-win situation in Tuesday’s sixth game of the NBA Finals.

The Golden State Warriors seized a 3-2 lead in the best-of-seven title series with a 104-91 home victory Sunday, meaning the Cavaliers must win Tuesday at home to force a seventh game Thursday in California.

If the Warriors, who had the NBA’s best record and top-scoring attack, can muster one more win, it will be another near-miss for long-suffering fans in Cleveland.

More than a half-century has passed since cursed Cleveland celebrated a championship team in any major pro sport — when the Cleveland Browns won the 1964 NFL crown.

It’s the longest such hoodoo for any city in US history, covering 156 combined seasons of futility for the Cavaliers, Browns and baseball’s Cleveland Indians.

A National Hockey League team, the Barons, lasted only two seasons before merging with a rival.

“I understand the drought our city has been in as far as a major championship, so it’s a huge motivation inside of me,” Cavaliers star LeBron James said. “It has helped me get to this point, but I’m not done. I’m going to command a lot out of myself and hopefully we’re able to come through.”

Cleveland sports supporters can only hope.

“The Drive” came in 1987 in the NFL’s American Conference final when Denver quarterback John Elway guided the Broncos 98 yards in 15 plays over 5:02 to level the game at 20-20 with 37 seconds remaining in the fourth quarter. Denver won 23-20 on an over-time field goal.

“The Fumble” came in a 1988 Broncos-Browns rematch, again with a Super Bowl berth on the line.

Denver led 38-31 in the fourth quarter when Browns rusher Earnest Byner took a handoff and looked set for a touchdown before he fumbled and Denver recovered at its 2-yard line. The Broncos allowed an intentional safety, but won 38-33.

“The Shot” came in the first round of the 1989 NBA playoffs with Chicago and Cleveland level at 2-2 when Michael Jordan made the game-winning basket at the buzzer of game five to eliminate the Cavs.

The Indians, who have not won Major League Baseball’s crown since 1948, lost the World Series to Atlanta in 1995 and the then-Florida Marlins in 1997, the latter after being three outs from victory in game seven.

The original Browns were relocated to Baltimore in 1996 by owner Art Modell and won Super Bowls as the Ravens in 2001 and 2013 while Cleveland was given an expansion team named the Browns that lost its lone playoff game in 2002 and has had only two winning seasons in 16 campaigns.

So Cleveland fans were overjoyed when the Cavaliers landed the top pick in the 2003 NBA Draft and selected James, a prep star from nearby Akron. He even led the Cavs into the 2007 NBA Finals, where they were swept by San Antonio.

But James broke Cleveland fans’ hearts in 2010 by leaving for Miami, where he won two titles and reached the finals twice more, then made his hometown cheer once more by returning last July, vowing to make the Cavs a champion.

During the playoff run, James and Cavs coach Dave Blatt met 1964 Browns running back Jim Brown, James even bowing to the 79-year-old American football legend as he sat at courtside before game three.

“What he means to this city, this community, what he means to sports and to myself is unprecedented, so it was great to see him there,” James said of the eight-time NFL rushing champion who was elected to the gridiron Hall of Fame in 1971 and later became an actor and civil rights activist.

“I was a huge football fan when I was a kid and Jim Brown was one of my idols,” Blatt said. “Jim told me, ‘Hey, it’s about time we win another one here.’ I said, ‘Nothing I’d like better.'”