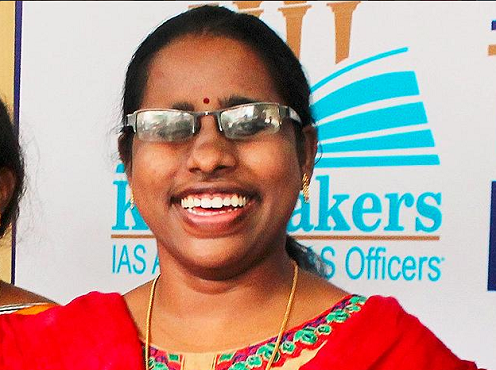 Chennai: What started as a dream in school days, a pursuit in college days, has finally fructified into reality for Beno Zephine N.L.

The 25-year-old from Chennai was informed by the external affairs ministry on Friday that she has been inducted into the Indian Foreign Service, the first 100 per cent visually-challenged person to gain entry into the 69-year-old service.Â

“I am really thankful to Prime Minister Narendra Modi for taking this big decision. I am told the IFS was not identified for the blind with certain exceptions made for candidates with low vision,” Beno, a probationary officer with the State Bank of India, told a leading daily. Since the news broke, she has literally been on her toes, giving motivational lectures at schools and colleges across the city.Â

She is now preparing to travel to the capital for training. â€œI may not have vision, but that did not stop me from achieving my mission to become an IFS officer. One should make the most of whatever resources they have rather than lamenting over what they donâ€™t have,â€ explains Zephine.

Her father, Luke Anthony Charles, a railways employee, and mother Mary Padmaja, a homemaker, have been huge sources of inspiration for Zephine. Born with the disability, she was educated at the Little Flower convent. “I thank my teachers and coaches at state training institute and several IAS academies,” she said. “I have no role models but believe in my individuality,” she said.Â

She wants to begin her diplomatic journey by meeting PM Modi and chief minister Jayalalithaa. “I want to seek their blessings and thank them for all the support”, she said.

On Sunday, she was felicitated by the Kingmakers IAS academy at Annanagar, where director Bhoominathan told her, “You have a huge responsibility to all the people who have supported you”.Â