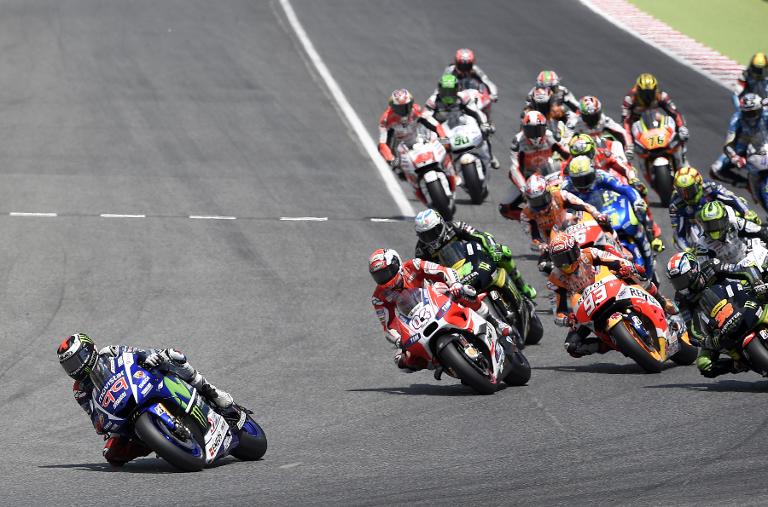 Rossi pushed hard and with five laps to go around the Montmelo circuit outside Barcelona, the gap was just 1.288sec.

But Lorenzo held the Italian off for victory on his home track to move within one point, on 137, of Rossi (138) in the overall standings.

Dani Pedrosa, on a Honda, was third for his first podium finish of an injury-hit season.

“I stayed focused and didn’t make any mistakes,” said Lorenzo.

There was no such joy for Spain’s Marc Marquez, the two-time reigning champion crashing off the track while in hot pursuit of Lorenzo early on, the third time he’s fallen in seven races this season.

“You try to push a little bit more,” said the 22-year-old Marquez.

“I made a mistake and I lose more points. The next race will be different and will be better.

“I was on the limit, and on my bike I need to be very careful.”

Rossi said he was happy with second spot after struggling to match Lorenzo’s pace in the three previous races.

“Throughout my career I always thought that when you take 20 points, it has been a good race,” said Rossi.

“I enjoyed this weekend, which was an important one, because I came from three races where I struggled a lot and I don’t like to arrive in third when Jorge wins.

“It’s a great shame because I had the pace to fight with him.”

France’s Johann Zarco, on a Kalex, consolidated his lead atop the Moto2 standings with victory ahead of Spanish duo Alex Rins and reigning champion Tito Rabat.

Zarco started on pole, but at one stage had slipped back to sixth before regaining the lead on the final lap.

Zarco has now accrued 134 points in the overall standings after his second victory of the season, with Rabat second on 94.

“If I wanted to overtake I had to do it at the start of the last lap,” said Zarco.

“I closed the gap step by step,” he added. “I enjoyed this race a lot and itâ€™s very good for the championship overall.”

British biker Danny Kent roared past a group of rivals to snatch an astonishing win for Honda in the Moto3 category.

Having now won four of the seven races so far, the 21-year-old Kent has 149 points in the world championship rankings ahead of Bastianini, who is second on 98.