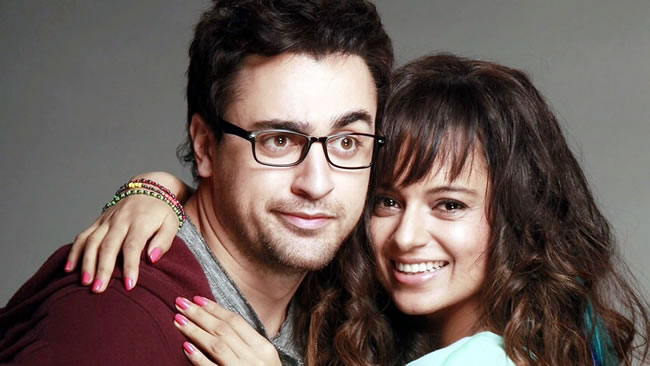 Mumbai: She is bold, she is spontaneous and she is single. This Bollywood diva brings her heart out whenever she speaks. Well she is none other our very own, Kangana Ranaut.

Kangana, who is known for her straight forward answers andÂ bindassÂ attitude while talking to media, has recently shared something which actually depicts her personality.

With back-to-back hits like ‘Queen’ and ‘Tanu Weds Manu Returns’, Kangana has proved how strong she is at the box office and she is unique in her own way.

On Sunday, while promoting her new film â€˜Katti Battiâ€™, where she will be seen opposite Imran Khan, the actress said she believes in ‘timepass’ romance.

The trailer of the movie, which releasedÂ on Monday, depicts her role as a girl, who does not believe in love and would rather choose live-in relationship.

Kangna will be seen in a different avatar doing timepass love with Imran, for the first time on screen.

The two actors are playing a couple that has separated after 5 years of live-in relationship, but as the norm in Bollywood is, one day they decide to fight all odds to reunite.

“When you date, marriage is not on your mind since first you don’t have an understanding of the equation or the relationship. However, I am very open to timepass romance,” Kangana said at the trailer launch of ‘Katti Batti’.

She also Kangana said she is open to the idea of a live-in relationship.

“To each to its own. I think it is about how that person makes you feel. If there is trust and faith, then go ahead and take the relationship to next level,” she said.

“It is a love story but might not end up like a love story. You can’t judge a genre while hearing a narration. It is difficult to say what the film and my character is about,” Kangana said.

Kangana was all praise for her co-star Imran, with whom she shares screen space for the first time.

“Imran is a delight to work with. He is always balanced. He never loses his cool. He is very calm. He will be shouting at one moment and the next moment he is giggling,” she said.

Katti Batti is a love story that begins in college and ends when the primary characters are mature enough to take the important decisions of their life.

Directed by Nikhil Advani, the film is set to hit the screens onÂ September 18, 2015.