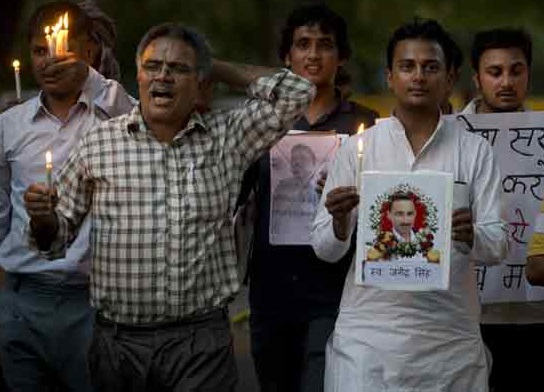 Shahjahanpur: The family members of Shahjahanpur-basedÂ journalistÂ Jagendra Singh, who was allegedly killed by state minister Rammurti Singh Verma’s henchmen and some police officials, have demanded a CBI inquiry into the case, adding that nobody from the administration has come forward to meet them.

“Nobody from the administration has come to meet us yet. We demand aÂ CBI probe and Rammurti should be removed from his position,” said Singh’s wife.

“No one from the government has come to meet me. But I will continue to sit here and protest. I want a CBI inquiry in the case and those who are responsible should be arrested,” said Singh’s son, Rahul.

Meanwhile, Singh’s father said, “We are not safe here. I have written to the Prime Minister to call for a CBI inquiry. Those responsible should be arrested.”

Jagendra was reportedly set ablaze Verma’s henchmen on June 1. Singh succumbed to his burn injuries in a Lucknow hospital a week later.

TheÂ ShahjahanpurÂ Police later registered a criminal FIR against eight persons, including the minister, in connection with the case.

The Uttar Pradesh Government has suspended five policemen for their alleged role in the killing. However, no arrests have been made so far.Â