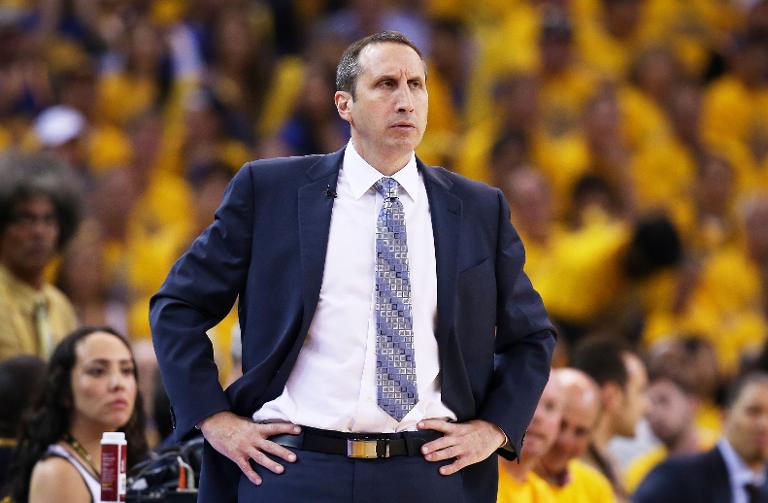 It was well before dawn, but a couple of religious students in skull caps sat in a Jerusalem bar before one of seven televisions, all of them beaming a basketball game from faraway America.

“You should never eulogise David Blatt,” said one of the students, 25-year-old Hillel Cohen, referring to an Israeli-American coach stalking the sideline and his ability to confound critics.

“In Israel, this is what he taught us,” he added as a crowd of about 50 locals and foreigners watched at the bar, including a 20-year-old soldier dressed in olive green fatigues, his M16 resting on his lap.

The coach, still making his name in the United States, is already something of a legend in Israel, and his team’s run to the finals of the US National Basketball Association in his first year at the helm has stoked pride and created new fans of the sport here.

Support has come from the highest levels. Prime Minister Benjamin Netanyahu called him last month after Blatt’s Cleveland Cavaliers advanced to the finals to congratulate him.

Some have been staying up or waking early to watch games that can begin at 4:00 am to see whether Blatt, who played professionally in Israel and coached local powerhouse Maccabi Tel Aviv to a European title, can succeed in the world’s biggest basketball league.

Blatt’s Cavaliers have been battling the Golden State Warriors in the best-of-seven championship series.

Golden State coach Steve Kerr also has a connection to the Middle East. His father Malcolm, a respected academic and author who specialised in the region, was shot dead in Beirut in 1984.

Despite a strong start, Blatt’s Cavs are currently down three games to two and Golden State can clinch the title by winning the next game, set for Tuesday night in the United States.

Should Cleveland rally and win the series, it would mean much more than a sports title for many Israelis eager to see David conquer Goliath, even though the coach has come under fire in the United States over some questionable calls.

“Everyone is talking about David Blatt, even a lot of people who don’t understand a lot about the NBA or a lot about basketball.”

Biblical themes feature in much of the press coverage — a new King David coaching a team whose star is nicknamed King James, for example.

The 56-year-old Blatt, who was born in Massachusetts and has also had coaching success in Russia and Italy, was not always so heralded in Israel.

He was harshly criticised for what was seen as lacklustre play by Maccabi Tel Aviv before the team eventually won the European title under Blatt.

But complaints about him went beyond basketball as well.

Some suggested he was not in tune with the true Israeli spirit despite having volunteered on a kibbutz, performed his mandatory military service and relocated to the country more than three decades ago, marrying an Israeli woman.

“He was perceived as too expensive, too arrogant and too American. He wasn’t chummy enough,” journalist and author Ari Shavit wrote in a recent Haaretz newspaper column calling on Israelis to embrace Blatt’s success.

Blatt also raised eyebrows for different reasons last year when he was quoted as speaking out strongly in favour of Israel’s deadly 50-day summer operation in Gaza.

But at the Jerusalem bar, there was no sign of cynicism. One American woman said her 65-year-old Israeli aunt in Tel Aviv had suddenly become a Blatt fan, following the news about him and updating her on the outcome of a recent game.

“I didn’t stay up to watch the game,” said Izzy Khaimov, a 26-year-old seminary student, who said her aunt updated her in the morning. â€œSheâ€™s telling me… ‘Izzy, David Blatt won.'”

The soldier said many had initially doubted whether Blatt could succeed in the NBA.

“In the beginning, most people just said he wasn’t good enough yet -â€” he wasn’t ready for the big leagues yet,” said Aviya Nachshon, his chair pulled up about a metre from the television.

“But he proved everybody wrong.”