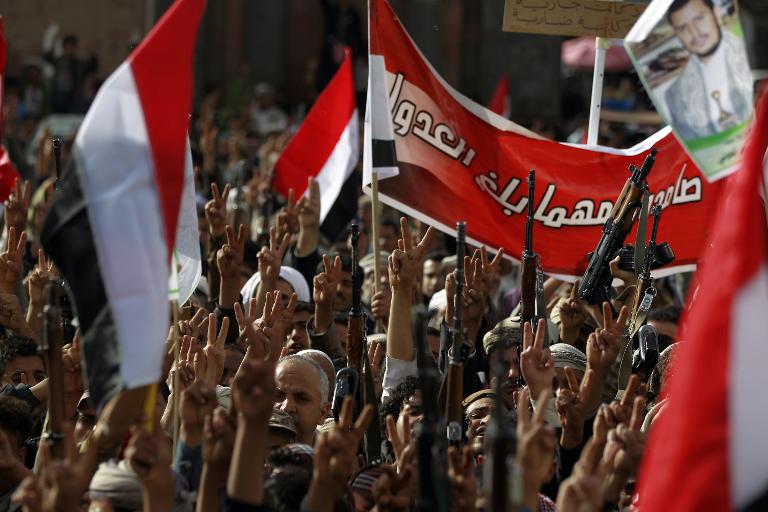 Yemen’s warring factions will come together for the first time in Geneva Monday in a bid to resolve the bloody conflict between Iran-backed Shiite rebels and the government of exiled President Abedrabbo Mansour Hadi.

The UN’s peace envoy for Yemen, Ismail Ould Cheikh Ahmed, said in a statement that Monday would see the start of “preliminary inclusive consultations” on the war that has claimed more than 2,500 lives and sparked a “catastrophic” humanitarian crisis.

Analysts said a breakthrough was “very unlikely”, however, and the delegations will not even begin talks in the same room.

Instead they will start with “what we call proximity talks” in two separate rooms with the envoy shuttling between them “with the hope they can be brought together”, UN spokesman Ahmad Fawzi told reporters in Geneva.

UN Secretary General Ban Ki-moon, who will attend the opening session of the talks, appealed for participants to take part “in good faith and without pre-conditions”.

He has said the negotiations are aimed at securing a ceasefire, agreeing on a withdrawal plan for the Huthi rebels and stepping up humanitarian aid deliveries.

Yemen has been wracked by conflict between the rebels and Hadi’s internationally recognised government, with analysts saying the fighting has reached a stalemate.

The rebels, supported by military units loyal to ex-president Ali Abdullah Saleh, have seized control of large parts of the country including the capital Sanaa, forcing Hadi to flee to Saudi Arabia.

Fearing an Iran-friendly regime on its southern border, Riyadh has been leading a campaign of air strikes against the rebels since March 26 but has so far failed to force them from territory they have seized.

International powers are keen for a resolution to the conflict, fearing the growing power of Al-Qaeda in the Arabian Peninsula, the Yemeni branch of the jihadist network which has taken advantage of the chaos to seize territory.

Meanwhile the UN has described the country’s humanitarian crisis as “catastrophic”, with 80 percent of the population — 20 million civilians — in need of aid.

Any chance of success at the first talks between the warring factions since Hadi fled Sanaa in February was “very unlikely”, Yemen expert Laurent Bonnefoy said, adding: “Indeed, each side appears to be inflexible, disinclined toward compromise”.

Nevertheless, the talks could offer breathing space, allowing Saudi Arabia to announce a truce that would launch more serious discussions as well as “save face by stopping an offensive they are clearly unable to win on the field,” said the analyst from the International Research Centre at Sciences Po.

On Sunday the rebels faced little resistance as they took control of Al-Hazm, the main city of Jawf province, residents and pro-government fighters said.

The city lies only 150 kilometres (90 miles) south of the border with Saudi Arabia.

Fighting raged on across several districts of Aden, residents said, accusing the rebels of firing Katyusha rockets on residential areas and destroying at least six homes.

The UN Security Council and Ban have called for a renewed humanitarian halt in the fighting after a five-day truce last month.

The World Health Organization said Friday that 2,584 people had been killed in fighting in Yemen as of June 7, with 11,065 wounded.

Representatives of Hadi’s government had arrived on Saturday for the talks, which had been due to start on Sunday but were delayed after the rebels refused to board a UN plane that had been scheduled for a stopover in Saudi Arabia.

The government delegation led by the foreign minister reiterated its demands on Sunday night, including that any ceasefire must see the militias withdraw from all territory they have conquered.

The talks had first been due to take place on May 28 but were postponed.