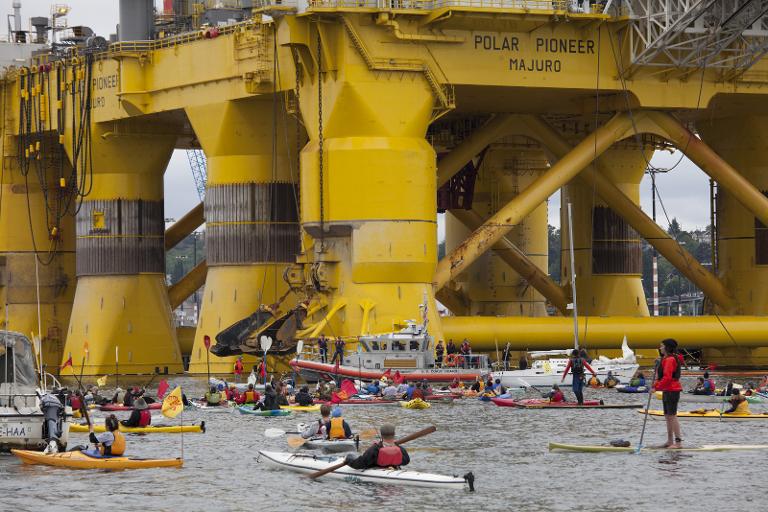 Greenpeace activists paddling in kayaks formed a blockade Monday to keep a mammoth Shell oil rig from departing from Seattle on a mission to drill in the Arctic.

Dozens of boats assembled in an arc around the towering yellow and while Polar Pioneer before dawn as tug boats were preparing to embark on the slow journey north to waters off Alaska, said John Hocevar, a Greenpeace activist who was also one of the kayakers.

Protesters shouted “Shell, no!”, banged their oars on the sides of their boats and paddled around to play cat-and-mouse with police speedboats that started making arrests a few hours after the water-borne protest began.

“We are difficult to deal with,” Hocevar, Greenpeace’s national director for Oceans, told AFP. As he spoke by phone, the shouts of protesters on the water could be heard.

Hocevar said he had a police boat just a few feet away from him and he expected to be arrested shortly, although he said the atmosphere was calm and violence-free.

It was the latest chapter in a ongoing battle between environmentalists and Royal Dutch Shell over the latter’s plan to station the 38,000-ton rig in a body of water called the Chukchi Sea to drill this summer.

Environmentalists say it is one of the world’s most ecologically sensitive regions. They oppose drilling there for a variety of reasons, saying among other things a spill would be particularly catastrophic because of the lack of capacity to deal with such a messy scenario.

“This is not an acceptable risk,” Hocevar said.

A first attempt by Shell to carry out exploratory drilling in the Arctic in 2012 was plagued with problems. Among other mishaps, one rig slipped its tug line and ended up grounded on an uninhabited Alaska island during a winter storm.

In March of this year, six Greenpeace activists boarded the Polar Pioneer rig as it was being tugged to Seattle from Hawaii.

The Polar Pioneer — it rises 300 feet (90 meters) above the water — is scheduled to be pulled along the Duwamish River through downtown Seattle, past the US tech hub’s famed Space Needle on its way out to Elliot Bay and then further north.

The kayakers out Monday brought provisions to try to stay out as long as they could.

“Every minute they are out there is another minute for President Obama to reconsider,” said Travis Nichols, Greenpeace’s director for Arctic issues.

Obama last month approved Shell’s plan to drill in the Arctic this summer.

Obama has said that while the United States needs to wean itself from fossil fuels, there has be a transition period and so long as it can be done safely, “US production of oil and natural gas is important.”