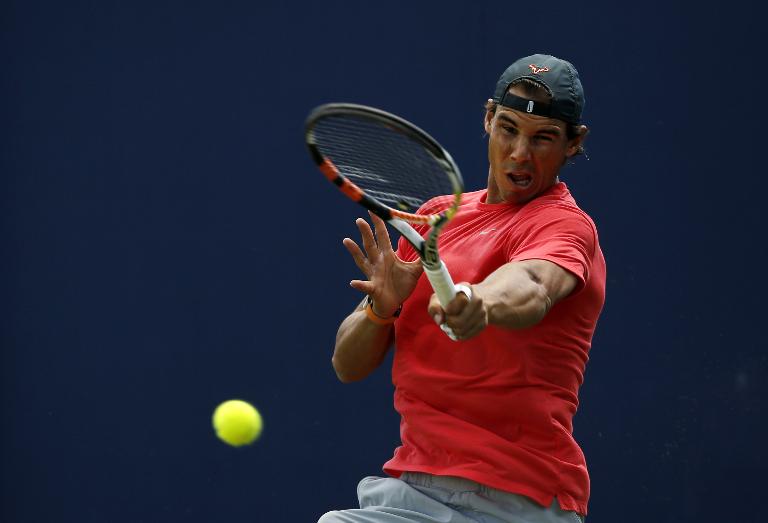 Rafael Nadal is willing to put his body and his bank balance on the line as he bids to get back on track after plunging to his lowest ranking for a decade.

Nadal has endured a miserable run in 2015 and the Spaniard hit a new low last month when the nine-time French Open champion suffered only his second loss in 72 matches at Roland Garros.

The 29-year-old’s quarter-final exit against Novak Djokovic pushed him down to 10th in the ATP rankings — the first time he has occupied such a low position since 2005.

Nadal is determined to purge the memory of a dismal five months by making a strong challenge for the Wimbledon title later this month and he took the first steps towards that goal by winning the grass-court tournament in Stuttgart last week.

But rather than take a break after that morale-boosting success, Nadal, who has suffered a series of debilitating knee injuries throughout his career, has headed straight to Queen’s Club in west London, where he faces Ukranian Alexandr Dolgopolov in the first round on Tuesday.

“It’s easy; I didn’t play enough good before. The first three months and a half of the season have been terrible for me, playing very bad almost every week,” Nadal told reporters when asked why he was putting himself through such a gruelling schedule.

“I wasn’t enjoying being on court. I was playing with too many nerves.

“After losing in Roland Garros I came back home. I spent one day on the sea, then the next day playing golf and I felt mentally and physically I was ready to play well again.

“A few times I had problems with my knees, but the knees are fine now. I don’t have physical limitations like I did in 2012 and 2013.

“I feel strong. I have the motivation to be back to my best. After what happened in Roland Garros, having the chance to win a title the week after was very good news for me.”

While world number one Djokovic won’t play a warm-up event before Wimbledon and Roger Federer and Andy Murray play only one — at Halle and Queen’s respectively — Nadal has followed his Stuttgart win by returning to Queen’s for the first time in four years.

The 14-time Grand Slam champion claimed his only Queen’s title in 2008 — the year he won Wimbledon for the first time — and he believes the benefits of extended preparation time on the grass-courts are worth suffering a potential financial loss.

Under British tax laws, foreign sports people have to pay tax on their worldwide earnings while working in the United Kingdon, which for Nadal — whose estimated worth is $32.5 million (28.8 million euros) according to Forbes — could represent a fairly large sum for his time at Queen’s.

“I think that changed a little bit. It’s still not the ideal situation for us, but it is better than a few years ago. I had to stop playing here for a while,” Nadal said about the tax issue.

For now, Nadal will instead focus about continuing to play his way back into form — even if he says he isn’t worried about winning a third Wimbledon title.

“I don’t know and I don’t care much (about winning Grand Slams). Seriously, my goal is to qualify for the World Tour Finals at the end of the season now,” he added.