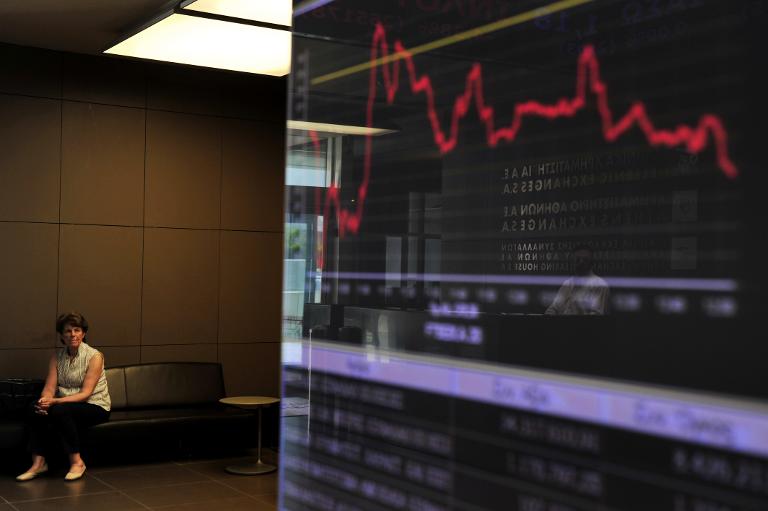 European stocks sank on Monday, with Athens plunging by more than seven percent at one stage, after last-ditch debt talks collapsed and sparked fresh fears of a Greek euro exit.

In early afternoon deals in Athens, the benchmark ATHEX index later stood at 739.64 points, down 4.50 percent from Friday’s closing level.

“The markets were awash with red… as investors continued to deal with the aftermath of the weekendâ€™s most recent Greek-deal collapse,” said Spreadex analyst Connor Campbell.

In foreign exchange meanwhile, the European single currency fell to $1.1231 from $1.1260 late on Friday in New York.

“Talks between Athens and its creditors collapsed on Sunday night, when negotiators were unable to reach any agreement on pension reforms, budget targets and tax rates.

“As a result, there are rumours that eurozone officials are now looking at what will happen if Greece defaults on its loans when the bailout programme ends at the close of June.”

Negotiations between Greece and its creditors broke down in less than an hour on Sunday, with each side blaming the other’s refusal to back down on certain issues.

“They came with their hands in their pockets,” a furious EU source close to the negotiations told AFP, while one Greek official described the creditors’ demands as “irrational”.

With Athens due to repay billions of euros in loans by the end of the month, the latest failure raises the spectre of a default, which could ultimately lead to the country crashing out of the eurozone.

He lambasted the creditors for “political opportunism” in trying to force Athens to make further cuts to its pension system, a concession the leftist anti-austerity government has steadfastly refused to make.

In London trade on Monday, airlines fell sharply on concern over the impact of a Greek eurozone exit, or Grexit, on the sector.