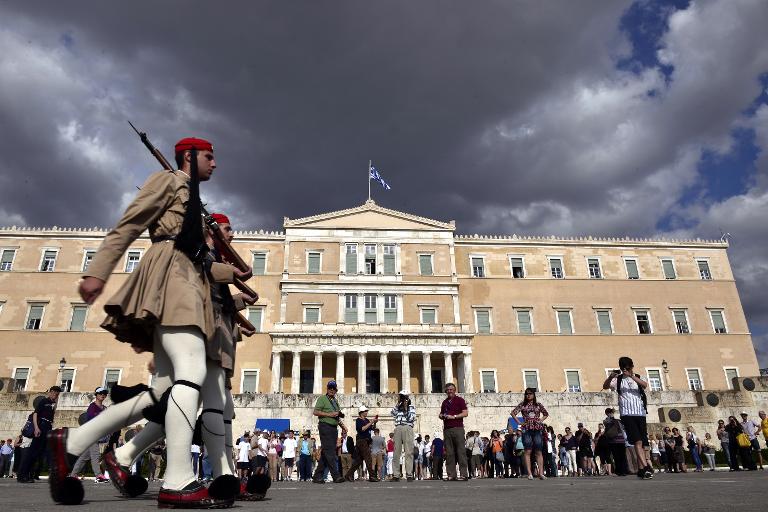 Default by debt-wracked Greece loomed dangerously closer after last-ditch talks between Athens and its EU-IMF creditors collapsed on Sunday, bringing the threat of a Greek exit from the euro closer than ever.

The crunch negotiations failed in their second day, heaping worry that the cash-starved Greek government was heading irreversibly into a financial abyss with a huge IMF debt payment due at the end of the month.

“They came with their hands in their pockets,” a furious EU source close to the negotiations told AFP, while Greek officials said the failure was the fault of the International Monetary Fund, the country’s most hardline creditor.

“The demands of the creditors are irrational, the discussions lasted 45 minutes,” an irate Greek government source said.

However analysts said it was unlikely the euro would take a plunge as investors were in a “wait-and-see mood”.

All sides had agreed that the talks were the last chance for Athens to unlock vital bailout cash in return for tough reforms that Greece’s 40-year-old Prime Minister Alexis Tsipras still doggedly refuses.

The IMF’s position was “intransigent and tough” because it was insisting on further pension cuts and a rise in value-added tax on basic goods, like electricity, the Athens source added.

But in a rare statement on their position in the talks, the IMF took a conciliatory approach, writing in an official blog that a deal would require “difficult decisions by all sides” — including Greece’s European partners.

Nevertheless chief economist Olivier Blanchard insisted that Greece must tackle its bloated pension system, which he said accounted for a whopping 16 percent of the country’s economy.

Greece is shattered economically after six years of crisis and despite two rescue programmes since 2010, worth 240 billion euros ($270 billion), mostly in loans owed to its European partners, led by Germany and France.

The small Mediterranean nation is now buried under a mountain of debt equivalent to 180 percent of GDP, or almost twice the country’s annual economic output.

According to an EU source, savings from the reform measures put on the table by anti-austerity Greece fell short by two billion euros.

The Greek proposal “remains incomplete”, the EU source said, and was not enough to unlock the 7.2 billion euros still remaining in Greece’s international bailout, which expires on June 30.

Also at the end of the month, Greece faces a huge 1.6 billion euro payment to the IMF with another 6.7 billion euros due to the European Central Bank in July and August, which Greek officials have said the government cannot afford.

“On this basis further discussions will now take place in the Eurogroup,” the EU spokesperson said, referring to a meeting of eurozone finance ministers set for Thursday in Luxembourg.

European Commission chief Jean-Claude Juncker “remains convinced that with stronger reform efforts on the Greek side and political will on all sides, a solution can still be found before the end of the month,” the spokesperson said.

Greek Finance Minister Yanis Varoufakis told Germany’s Bild newspaper in an interview published Monday that a deal was still possible and could even be concluded “in one night” if German Chancellor Angela Merkel were in attendance.

All eyes will be on the financial markets on Monday with the feeling now stronger than ever that Greece could be finally heading for an exit from the euro after five years of crisis.

The Athens stock market already crashed six percent on Friday on news that the fed up eurozone nations were making contingency plans for a default by Greece.

That came a day after the IMF announced it had pulled its technical teams from Brussels due to a lack of progress in the talks.

To meet the June 30 deadlines, a reform deal would have to be resolved by the Thursday meeting of the eurozone’s 19 finance ministers, who control the bailout purse strings.

But any deal also needs to go to many national parliaments, including in European paymaster Germany, where passage is not certain.

Up to the collapse of talks, playing hardball seemed to have been working with Athens easing up, at least verbally, on the leftist Syriza government’s anti-austerity platform.

“We had promised to negotiate hard with our partners during our election campaign and that’s what we did,” Economy Minister Giorgos Stathakis was quoted as saying in the Avghi newspaper on Sunday.

But “the idea of a rupture (with Europe) is not in our mandate,” he added.