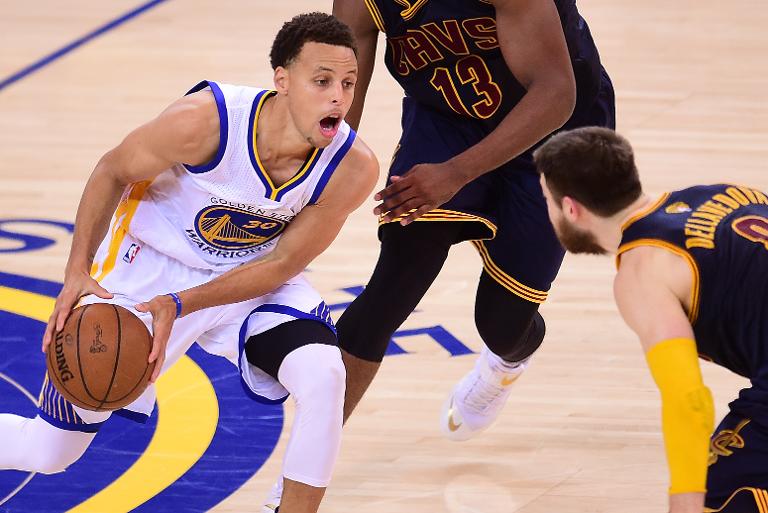 Stephen Curry finally displayed the shotmaking skills that made him this season’s NBA Most Valuable Player and as a result the Golden State Warriors are on the brink of ending a 40-year title drought.

Curry produced his finest performance of his first NBA Finals on Sunday, scoring 37 points to power the Warriors over the Cleveland Cavaliers 104-91 as Golden State seized a 3-2 lead in the best-of-seven championship series. The Warriors can claim their first crown since 1975 by winning game six Tuesday in Cleveland.

“He made some terrific shots,” said Cavaliers coach Dave Blatt. “There are a few that he made, more than a few, that were extremely difficult shots, high-level shots by a high-level player. Sometimes you’ve got to take your hat off to the other guy. He made some tremendous shots. That’s respect.”

Curry connected on 13-of-23 shots from the floor, including 7-of-13 from 3-point range, and added seven rebounds and four assists. He scored 17 points in the fourth quarter, 12 of those in a decisive 19-5 late-game spurt that saw him sink two jaw-dropping 3-pointers.

“Tip your hat to a guy who makes shots like that and he’s the guy that can do it,” Cavaliers star LeBron James said. “He’s the best shooter in our league.”

Asked what more his team could have done to stop Curry, Blatt replied: “That’s a really a good question. Not a lot you can do, honestly.”

Curry, adding to the NBA record for most 3-pointers in a playoff run with every basket from beyond the arc, had struggled earlier in the series, shut down at times by hustling Australian guard Matthew Dellavedova, notably in game two when Curry was only 5-of-23 from the court and 2-of-15 on 3-pointers.

Curry had averaged 23.5 points a game but only shown flashes of the hot hand that helped Golden State to an NBA-best 67-15 record until Sunday, when he became the first player in NBA Finals history to make seven 3-pointers in multiple games of an NBA Finals, matching his game three output.

“He’s one of the best shooters in our league,” Cavaliers forward Tristan Thompson said. “I guess he exploded.”

“From the very beginning when they went small, I thought: ‘This is Steph’s night. This is going to be a big one for him because he has all that room,'” Kerr said.

“I just think sooner or later Steph’s going to get going. He had a tough first couple of games. He got going at the end of game three and that’s all it takes. Steph makes a couple shots. He feels like he’s got it rolling and he has been great ever since. It’s not really an adjustment. It’s just the law of averages are that Steph’s going to make some shots.”

One 3-pointer came over two defenders after behind-the-back and crossover dribbles and brought a huge roar from the crowd, a possible defining moment.

“It was a fun moment, but it only means something after we win the championship because signature moments only come for players who are holding the trophy,” Curry said.

And to that end, Curry has been willing to set up other teammates when he has been tightly defended, notably forward Andre Iguodala.

“Steph is a great player. His mind is getting better and better, and he has even more room to improve,” Iguodala said. “He has just been an MVP for us.”