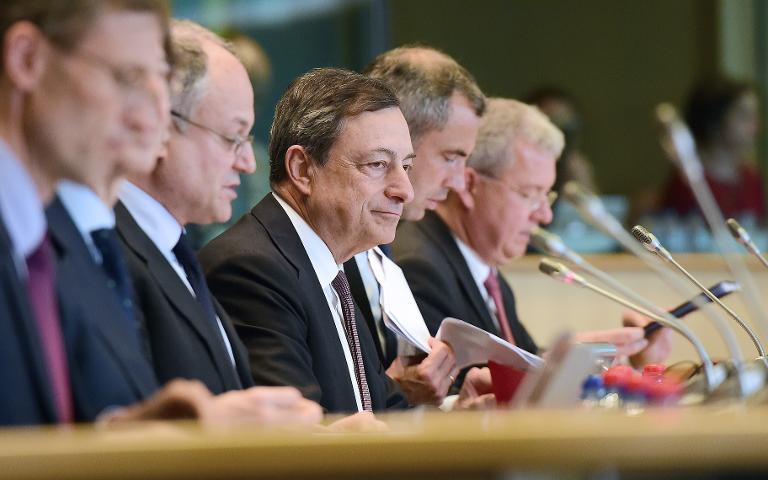 European Central Bank chief Mario Draghi on Monday urged all sides in the negotiations on Greece “to go the extra mile”, but insisted the ball was in Athens’ court.

“A strong and credible agreement with Greece is needed, not only in the interest of Greece, but also of the euro area as a whole. While all actors will now need to go the extra mile, the ball lies squarely in the camp of the Greek government to take the necessary steps,” Draghi told the European Parliament’s Committee on Economic and Monetary Affairs in Brussels.

His comments were relayed live via the European Parliament’s website.

“By strong and comprehensive I mean an agreement that produces growth, that has social fairness, but that is also fiscally sustainable, ensures competitiveness, and addresses the remaining sources of financial instability. I can assure you that the ECB is doing all it can to facilitate a successful outcome,” Draghi said.

Greece’s new anti-austerity government under Prime Minister Alexis Tsipras has been locked in negotiations with its creditors — the European Union and the International Monetary Fund — for five months in the hopes of securing the release of the remaining 7.2 billion euros in rescue funds.

But frustration has mounted on both sides, with Athens refusing to sign on to what it described as “irrational” economic reforms demanded by its creditors.

Draghi said the IMF, which would put up a large chunk of the 7.2 billion euros, was insisting not only on Athens’ adherence to its reform commitments, but also that the partner countries provide assurances regarding further financial support after the current bailout programme expires on June 30.

“The IMF is saying that they can disburse this money only if they have enough assurances about financing of a follow-up programme, because they believe that further financing is necessary. It’s not easy but it’s essential,” Draghi said.

Turning to the state of Greece’s banks, Draghi said the country’s major banks were currently solvent and the ECB would continue to provide liquidity to them to help finance the economy.

Since Tsipras and his anti-austerity party came to power, the sole financial lifeline still open to Greek banks has been the Emergency Liquidity Assistance (ELA) mechanism, which is more expensive than normal central bank refinancing operations.

“At this stage, major Greek banks are solvent and the collaterals that they provide are adequate,” Draghi said.

“Of course, the situation is in evolution and we’ll have to monitor the situation very closely and to see whether the conditions for the assessment of the collaterals are still in place and more generally on the health of the banking system,” he said.

The so-called Eurosystem or European system of central banks had so far extended around 118 billion euros ($133 billion) in liquidity to Greek banks, which was more than double the amount at the end of 2014, Draghi said.

“The current liquidity support represents around 66 percent of Greece’s gross domestic product, the highest level as a share of GDP of any euro area country,” Draghi said.

“Liquidity will continue to be extended as long as Greek banks are solvent and have sufficient collateral.”

Draghi refused to be drawn on a possible restructuring of Greece’s debt.

“I don’t want to take a position” on that, he said, but pointed out that the costs for Athens of servicing its debt were already low.