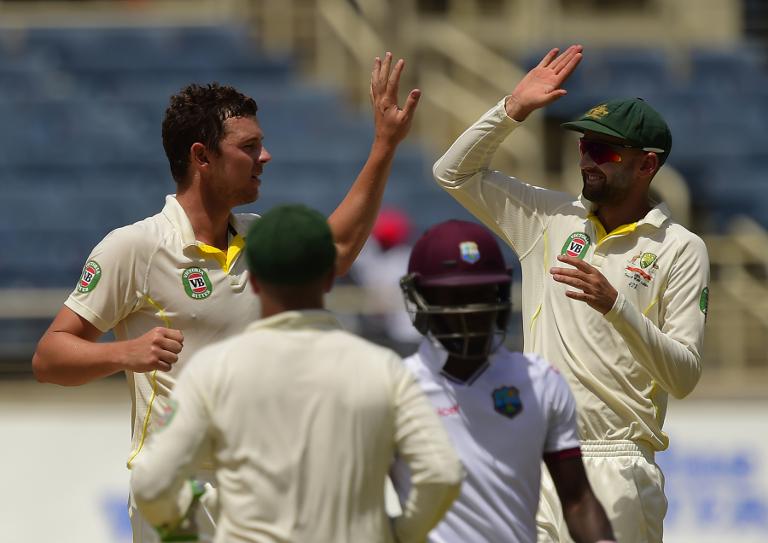 Australia demolished hapless West Indies on the fourth day of the second and final Test at Sabina Park on Sunday, routing the home side for 114 to win by 277 runs and take the series 2-0.

Off-spinner Nathan Lyon formalised the result with the wickets of Kemar Roach and Jerome Taylor off successive balls early in the afternoon session.

That was after Mitchell Johnson had ended the resistance of Denesh Ramdin, having the West Indies captain caught by his opposite number, Michael Clarke, at slip for a top score of 29.

“We”re really happy to win two Test matches away from home,” said Clarke in reflecting on his side’s performances over the fortnight in the Caribbean and ahead of the Ashes.

“There’s a lot of cricket ahead of us and it was very important to come and achieve what we have.”

For Johnson, his second wicket of the innings lifted his career tally to 291, drawing him level with Craig McDermott, who is now Australia’s bowling coach, as the joint-fifth most successful bowler in Test cricket for his country.

Steve Smith earned the man of the match award for his innings of 199 and 54 not out.

“It was nice to score some runs in this match and contribute to another win for Australia,” said Smith.

“I thought it was outstanding for our bowlers to take 40 wickets over the two matches in these conditions.”

Mitchell Starc, who started the rout by removing both openers in the first over of the innings late on the third day, got the ball rolling again for the tourists in the morning when he bowled Shane Dowrich off his pads after 19 minutes’ play.

Hazlewood, who took 12 wickets in the two Tests, was named man of the series.

Despite struggling to find his rhythm throughout the match, Johnson joined the rampant wicket-takers when he breached the defence of Shai Hope for the sixth wicket of the innings.

Jason Holder, who took on the Australians with the bat and verbally during an entertaining first innings of 82 not out the day before, failed to have any impact the second time around.

The promising all-rounder pushed a straightforward catch to Starc at short midwicket off Shane Watson 15 minutes before the interval.

Starting the morning at 16 for two, Bravo and Dowrich were kept under a virtual state of siege by the outstanding pace and perseverance of Starc and Hazlewood.

Despite his status as the most experienced West Indies batsman in the match, given the unavailability of Marlon Samuels, Bravo struggled to get the ball away.

He eventually fell for just 11 off 49 deliveries as Shaun Marsh held his second low catch of the innings at gully, this time off the bowling of Hazlewood.

Just a few minutes earlier, Starc’s unerring accuracy proved too much for Dowrich, the right-hander being bowled off his pads.

No-one in the middle-order was able to resist the Australians, leaving the captain and the tail to somehow save face for a side on the cusp of a humiliating defeat to follow their nine-wicket loss inside three days in the first Test in Dominica.

Their effort ultimately proved in vain.

“Our young guys should take a lot from this, taking on one of the toughest teams in world cricket,” said Ramdin.

“We showed some fight, although not for long enough. Let’s hope we improve by the time we face Australia again at the end of the year.”