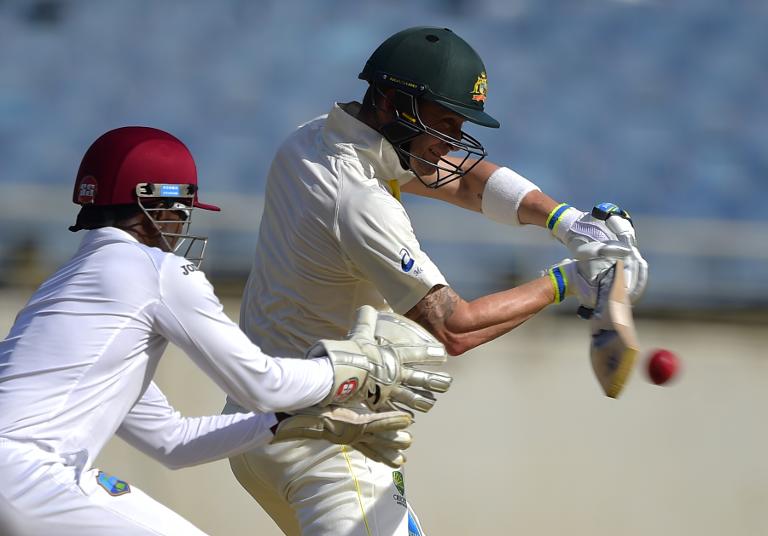 West Indies lost both openers to Mitchell Starc and were 16 for two at stumps after being set a daunting target of 392 by Australia on the third day of the second and final Test at Sabina Park.

With a first innings lead of 179, the visitors’ openers David Warner (62) and Shaun Marsh (69) on Saturday compiled an opening stand of 117 on the way to individual half-centuries and Steve Smith followed his first innings 199 with an unbeaten 54.

Skipper Michael Clarke then determined that, at 212 for two in the final session, the tourists had enough runs on the board and challenged his bowlers to make early inroads in eight testing overs before the close of play.

Starc was on target immediately, bowling Kraigg Brathwaite off the inside-edge and drawing a loose drive from fellow-opener Rajendra Chandrika to be caught at gully.

Both failed to score, Chandrika enduring the indignity of a â€œpairâ€ on debut, just the second West Indian in the history of Test cricket to have such a chastening experience.

Darren Bravo, who had an lbw verdict off spinner Nathan Lyon overturned on review, will resume on the fourth morning with the inexperienced Shane Dowrich and the odds heavily in Australia’s favour to complete victory and a 2-0 series sweep with a day to spare.

Jason Holder put smiles on glum West Indian faces at the start of the day, blazing an unbeaten 82 to ensure that the home side, beaten by nine wickets inside three days in the first Test, avoided the follow-on.

With the home side in deep trouble at 143 for eight overnight, Holder stole the spotlight with a brilliant, counter-attacking innings.

He belted 12 fours and two sixes, the second of the towering hits taking him to his second Test half-century, off just 63 deliveries.

“I was just trying to be positive to throw the Australians off their game plan,” said Holder about his innings.

“I know we’re in trouble now but it’s still a good pitch for batting and if we play properly and positively I think we still have a chance to get the target.”

He seemed well on course for a second hundred at the highest level of the game.

However Josh Hazlewood wrapped up the innings with the wickets of Kemar Roach and Jerome Taylor in the space of three deliveries to finish with his best Test innings figures of five for 38 off 15.5 overs.

“The new ball is the key. You’ve just got to make good use of it and stick to the basics,” Hazlewood observed in reflecting on the bowling effort.

“I’m very happy with my own form. The rhythm is good and the ball is coming out nicely.”

Roach, who partnered Holder to the middle at the start of play after Veerasammy Permaul was dismissed off the last ball of the second day, played sensibly in a 77-run ninth-wicket partnership with his fellow Barbadian.

He contributed just seven runs but his defiance for 55 minutes during which he faced 36 deliveries allowed his fluent partner to enhance his already growing reputation as a batting all-rounder.

Seven weeks after a maiden Test hundred, a defiant unbeaten 103, saved the West Indies from defeat in the first Test against England in Antigua, Holder showed the more attacking side to his batting repertoire, most of his boundaries coming from fluent drives and extravagant slashes through the off-side.

Another hundred looked his for the taking until Hazlewood was summoned by Clarke for a second spell.

The bowler responded immediately by drawing Roach into edging a drive to wicketkeeper Brad Haddin and then trapping Taylor palpably lbw when the last man offered no shot to his second delivery.