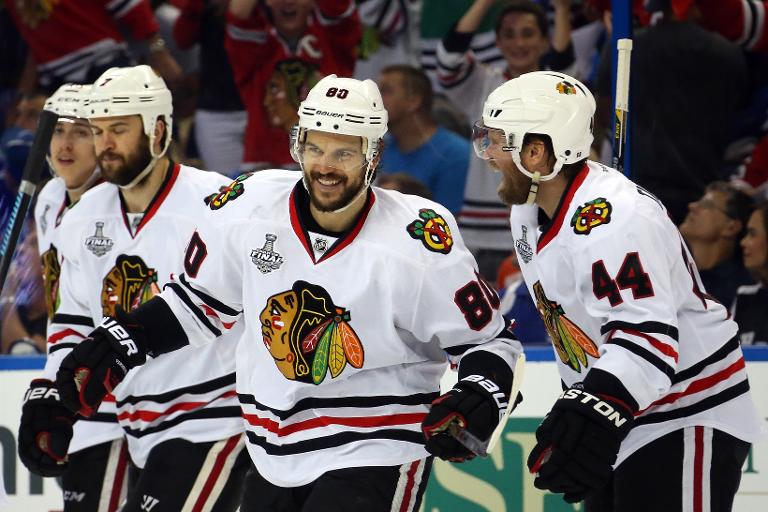 Antoine Vermette scored the winner early in the third period on Saturday to lift Chicago to a 2-1 win over Tampa Bay that put the Blackhawks on the brink of their third Stanley Cup title in six years.

Chicago now leads the best-of-seven series 3-2 and could wrap up an NHL title at home for the first time since 1938 with a win over the Lightning in game six at the United Center on Monday.

Canadian Vermette scored his second game winner of the finals as he hammered home a rebound from the slot just two minutes into the third period.

Chicago forward Kris Versteeg took the initial shot and Tampa goalie Ben Bishop kicked the rebound right to Vermette, who was driving hard to the front of the net.

It was the fourth goal, and the third game winner, of the post-season for Vermette, who also scored the go-ahead goal in a 2-1 victory in game one.

“It is nice,” said Vermette, who started the season in Phoenix before being traded to the Blackhawks in February. “You want to contribute and it is nice reward to get it done.

“This is a good group. A special team and I’m glad I’m here.”

This has been one of the closest finals in league history and Saturday’s game five was no different as for the third straight game the teams entered the third period tied.

Of the 23 teams that have won game five after a split of the opening four contests of the final, 16 have gone on to claim the Stanley Cup.

Forward Patrick Sharp also scored and goaltender Corey Crawford made 31 saves for the Blackhawks, who are chasing their sixth Stanley Cup title in franchise history after previous wins in 2013, 2010, 1961, 1938 and 1934.

“It will be crazy in town over the next two days. The buzz will be off the charts,” said Blackhawks coach Joel Quenneville of going back to the Windy City for game six.

Game seven if necessary would be Wednesday in Tampa.

Just four teams since 2001 have rebounded to claim the Stanley Cup after losing a game five. That includes the Lightning, who rallied to beat the Calgary Flames in seven games for their lone NHL title in 2004.

Valtteri Filppula scored the only Lightning goal and Bishop made 27 saves for Tampa Bay, who are a modest 6-7 at home in the playoffs.

Saturday’s contest marked the return of Bishop to the Tampa net from an undisclosed ailment. He had to leave game two in the third but was in net for a game three win before missing all of game four.

Bishop’s night got off to a rocky start as a collision with teammate Victor Hedman led to Chicago’s opening goal just over six minutes in.

Bishop skated out of his crease to clear the puck but ended up bumping into Swedish defenceman Hedman and the puck squirted through his legs right to Sharp who had an empty net to shoot at.

Tampa Bay received more bad news later in the first when they dropped down to 11 forwards after Russian Nikita Kucherov slammed into the post head first and had to leave the game.

Filppula scored off a wrist shot to tie it 1-1 halfway through the second after taking a nice pass from Canadian defenceman Jason Garrison.

Tampa swarmed the Chicago goal in the final minute looking for the equaliser but ended up shooting themselves in the foot by taking a too many men penalty with just eight seconds to go.

They had already pulled Bishop for an extra attacker when referee Wes McCauley called them for having seven skaters on the ice.