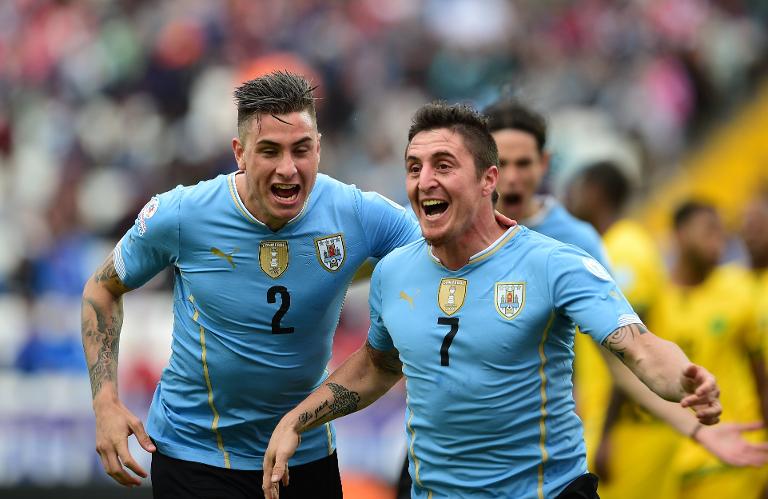 Uruguay captain Diego Godin demanded improvement on Saturday after his team opened the defence of their Copa America crown with a lacklustre 1-0 win over Jamaica.

The Uruguayans, badly missing suspended striker Luis Suarez, eked out victory over the Caribbean minnows thanks to a second half goal from Cristian Rodriguez.

Godin expressed relief at claiming all three points but said Uruguay would need to improve in their coming Group B games against mighty Argentina and Paraguay.

“It’s a good result to start with, now we need to correct some mistakes,” Godin told Chilean television.

“It’s very important to win the first game in the Copa America, as it is in any big tournament,” the Atletico Madrid defender added. “We have to go game by game, but we will have to improve and keep working hard.”

Uruguay, surprise winners of the 2011 tournament in Argentina, are fielding a new-look side in Chile under the guidance of long-serving coach Oscar Tabarez.

The absence of Barcelona star Suarez, still serving an international ban for biting Italy’s Giorgio Chiellini at the World Cup last year, has deprived La Celeste of their most potent attacking weapon.

Suarez had sought to rally his team-mates shortly before Saturday’s game in the northern Chilean city of Antofagastas, taking to Twitter to voice his support.

“Everyone in Uruguay is behind you…Vamos Uruguay, VAMOSSS!!!,” he tweeted.

Suarez’s absence was all too apparent during a lacklustre opening 45 minutes at the 21,000-capacity Antofagasta Regional Stadium.

Uruguay barely created a chance against Jamaica, one of two teams from the North America, Central America and Caribbean zone (CONCACAF) invited to take part in the Copa America.

Uruguay finally broke the deadlock seven minutes after the break with a cleverly worked set-piece routine.

Boca Juniors midfielder Nicolas Lodeiro floated a free-kick from wide on the left for defender Jose Maria Gimenez, who lost his marker to head back into the area for Rodriguez, on loan with Brazilian side Gremio from Atletico Madrid, to finish.

Jamaica, whose squad is made up largely of players based in Major League Soccer and England, rarely looked like threatening the Uruguay defence.