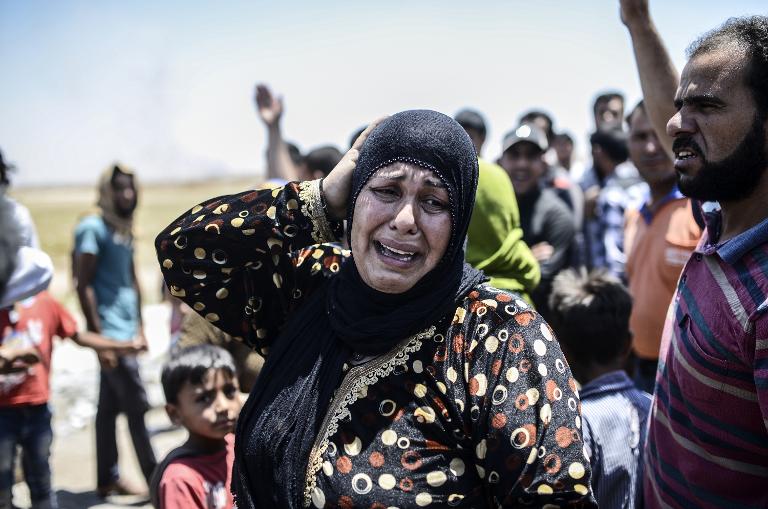 Kurdish forces pressed their advance on a strategic jihadist-held town in northern Syria on Sunday as terrified residents fled in droves and were pushed back from the Turkish border.

Backed by Arab Syrian rebel factions and air strikes by the US-led coalition, Kurdish militia were closing in on Tal Abyad, a town used by the Islamic State group as a gateway from Turkey into its bastion province of Raqa.

Kurdish sources say the goal is to cut off a crucial supply line for the jihadists, who have been accused of bringing in foreign fighters and supplies across the Turkish border.

Many from the area’s mixed population of Arabs and Kurds were fleeing in anticipation of a major battle, and thousands were gathered behind barbed wire fences around the Turkish border crossing of Akcakale, an AFP photographer reported.

As they had on Saturday, Turkish troops were preventing anyone from crossing, sporadically firing water cannons to ensure the Syrians stayed back from the fence.

The Syrians — who had spent the night at the fence sleeping in the open — could be heard asking in Arabic for help. Many held up empty bottles, pleading for water in scorching early summer temperatures.

The black flag of IS could still be seen flying over Tal Abyad. Late on Saturday, several figures — apparently IS fighters — dressed in battle clothing and carrying rifles had came up to the fence on the Syrian side of the border, as Turkish soldiers eyed them nervously.

Sounds of fighting could be heard from across the border and at around 1000 GMT a loud explosion sent a huge plume of white smoke rising several kilometres (miles) to the east of Tal Abyad.

Fears have been building in the area for days, as the Kurdish People’s Protection Units (YPG) militia and its allies advanced from east and west on the town of about 15,000.

By late Saturday, YPG forces had advanced to within five kilometres (three miles) of Tal Abyad, according to the Syrian Observatory for Human Rights.

The Britain-based Observatory, which relies on a wide network of activists, medics and fighters throughout Syria, said the YPG had seized at least 20 villages southwest of the border town.

“They are on the eastern outskirts of Tal Abyad, but the southwestern front is much more difficult because it’s more populated,” Observatory head Rami Abdel Rahman said.

A Kurdish activist who visits the front line daily said residents were seeking refuge wherever they could.

The town lies on a mostly Sunni Arab part of the border between the mainly Kurdish town Kobane and Syria’s most populous ethnic Kurdish region — Hasakeh province — in the northeast.

Backed by US-led air raids, YPG units scored a landmark victory against IS in January in Kobane.

Since then, Kurdish forces have been chipping away at jihadist territory on either side of Raqa — from Hasakeh province to the east and Aleppo to the west.

“We are waiting for the whole border area to be liberated — from northeastern Syria all the way to Kobane,” Mustafa Ebdi, a Kurdish activist in Kobane, told AFP.

Both Ebdi and the Observatory said the Kurds had already occupied the nearby town of Suluk, denying IS access to Tal Abyad from the east.

Abdel Rahman said US-led air strikes had been key in forcing the jihadists to withdraw.

On Saturday, the coalition said it had struck three IS tactical units near Kobane and had destroyed one of the group’s fighting positions.

To the west in Aleppo province, coalition raids killed at least 12 IS fighters as they fought a rebel alliance for control of another supply route from Turkey, Abdel Rahman said.

Northern Syria is the most complex battleground in the country’s more than four-year civil war, with IS fighting Kurdish militia, Syrian government forces and a rebel alliance including rival jihadists of Al-Qaeda.

Turkish President Recep Tayyip Erdogan said on Sunday he was troubled by the advance of the Kurds in northern Syria, saying they could in the future threaten Turkey.

Erdogan alleged that ethnic Arabs and Syrian Turkmen were being targeted and said Turkey had already taken in around 15,000 of them last week before closing the frontier.

He said the places they had vacated were being occupied by the Syrian Kurdish group the Democratic Union Party (PYD) and the outlawed Kurdistan Workers Party (PKK).

“This could lead to the creation of a structure that threatens our borders,” he told reporters. “Everyone needs to take into account our sensitivities on this issue.”

Erdogan has repeatedly expressed concern about the West’s backing for Kurdish forces in Syria. The PKK fought a decades-long insurgency for Kurdish self-rule in Turkey’s southeast that claimed tens of thousands of lives on both sides.