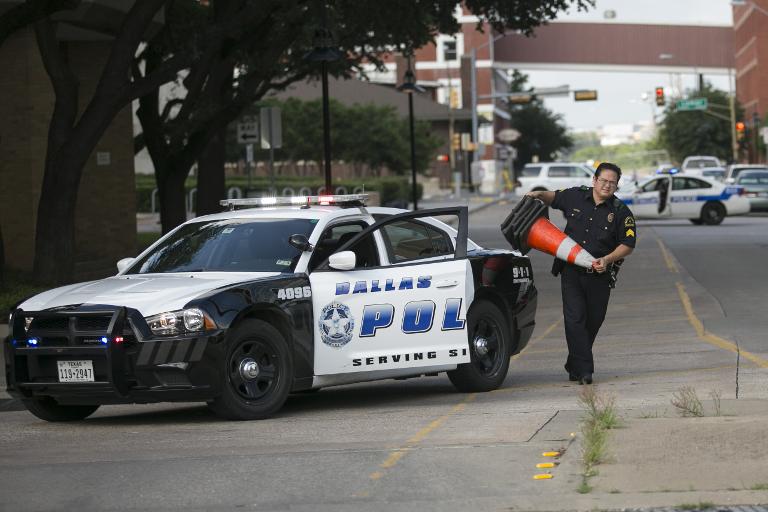 A man sprayed gunfire and planted several bombs at Dallas police headquarters in a rampage that came to a brutal end when snipers shot him dead after several terrifying hours.

Police said they were “blessed” that nobody was hurt and ruled out any connection to terrorism in the one-man assault that saw gunfire echo around the darkened streets of the sprawling Texas city and left destruction in its wake.

The night of violence began around 12:30 am (0530 GMT) when a man in an armored van rammed into police squad cars at Dallas police headquarters and opened fire.

Shots rang out from several different locations, leading police initially to believe multiple gunmen were involved, before they established the attacker was acting alone.

The mayhem came to a bloody and abrupt end in a restaurant parking lot when SWAT police fatally shot the man — who has not been officially named — through the windshield of the armored van shortly before dawn.

He described how the man, who gave his name as James Boulware, fired multiple shots at the police headquarters, pausing to reload and apparently using an assault rifle and shotgun.

He “meant to kill officers and took time to discharge that weapon multiple times to accomplish their wanting to harm our officers,” Brown added.

Shortly after, police chased the van to Hutchins, a nearby suburb south of the Dallas, where officers surrounded the armored vehicle and more shots were traded. Several bullets hit police cars but, again, no officers were injured.

Officers tried but failed to negotiate with the man, whose actions were reportedly sparked by a custody battle over his son.

A man claiming to be the man’s father, Jimmy Lee Boulware, said his son felt “beaten down” by police and Child Protective Services.

The elder Boulware, 73, also told CBS affiliate KTVT that James struggled to find and keep a good paying job due to his criminal record.

“He doesn’t show to be in our databases on any terrorism watch list or anything like that,” Brown said. “So it may have just been a rant.”

The Dallas Police Association, which represents Dallas officers, tweeted that the man had “three family violence cases against him. (He) was very disgruntled against law enforcement and the criminal justice system.”

After the attack the association warned all officers to be on their guard and police ramped up security at other law enforcement facilities in Dallas as a precautionary measure.

At 4:40 am, police sent in an explosives robot to examine a bag that had been found back at the police headquarters. The bag blew up as the robot tried to move it, damaging several cars.

Brown earlier said other pipe bombs had been found in one of four duffle bags that were “dispersed throughout the front and side of police headquarters.”

Around the same time, following attempts to negotiate with the man, snipers used a powerful .50-caliber rifle to disable the van’s engine block, then they shot him about half an hour later.

Police sent in a bomb disposal robot to examine the vehicle and determine whether he was dead. They also carried out a controlled blast to render any explosives in the van inert.

“You’ve watched it on TV where it’s happened in New York, California, Utah and different other places but never here at home like this,” said witness Glenn Coleman, who saw the conclusion to the drama.

In November, police shot and killed a man in the Texas state capital Austin after he opened fire at several buildings including the police headquarters.