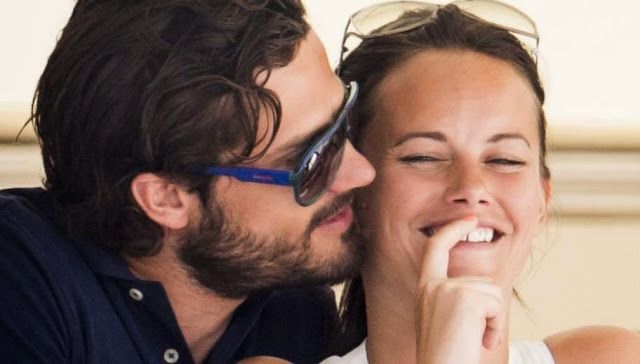 A cheer erupted from the crowd outside the palace in Stockholm when Carl Philip kissed his bride, a former glamour model, before riding in a horse and carriage procession through the heart of the capital. Several hundred thousand well-wishers lined the streets.

At the televised ceremony inside the royal chapel, the prince blinked back tears as the bride was led down the aisle to the dramatic tones of Enya’s ‘Father in Heaven’.

He welled up again as he struggled with the ring and the couple giggled in an almost private-looking moment in front of 550 guests.

The ceremony was witnessed by other royals including Britain’s Prince Edward, Belgium’s Queen Mathilde and Princess Takamado of Japan.

The new princess wore a dress in three tones of white crepe-silk and lace by Swedish fashion designer Ida Sjostedt, ending with a several-metres-long train.

Chief court chaplain Lars-Goran Lonnermark, who officiated the service, gave the couple advice on coping with the pace of married life, drawing a parallel with the prince’s passion for race car driving.

“Your home should be a different kind of pit-stop… where you’re not always counting the minutes and seconds but can be together and unwind. Breathe out all the stress and breathe in your security with each other and love for one another,” he said.

“You already won the big prize when you said yes.”

Reminiscent of a scene from the film ‘Love Actually’, the newlyweds left the chapel together to a rocky gospel song as the assembled guests clapped to the beat.

Princess Sofia, 30, a slender and elegant brunette with no royal background, is known for her infectious gap-toothed smile and easygoing ways.

She told public broadcaster SVT in an interview aired Friday that the couple clicked after they met at a lunch with mutual friends in 2010.

Her husband, 36-year-old Carl Philip, is the second child of King Carl XVI Gustaf and Queen Silvia and holds the title of Duke of Varmland.

He is third in line to the throne, behind his elder sister Crown Princess Victoria — who also married a commoner — and her three-year-old daughter Princess Estelle.

The prince maintains his royal title thanks to a change of rules in 1980 which makes Hellqvist a princess through marriage.

“It is the first time a woman of the people marries a prince who is also marrying a princess,” royal historian Goran Alm told public broadcaster SR.

A glamorous and openly affectionate couple equally known for their sporty lifestyle, Carl Philip and Sofia are keen to project an image of themselves as modern and open royals, and are often seen running errands in town or picking up takeaway pizza in Stockholm’s chic neighbourhoods.

The Swedish media revealed the prince’s budding relationship with Hellqvist in 2010, titillated by her racy past.

In 2005 she took part in the Swedish reality show “Paradise Hotel”, where young scantily-clad men and women stay at a luxury resort and compete to be the last contestant voted off amid intrigue, scheming and drama.

The year before that, at age 20, she had posed topless with a boa constrictor for the men’s magazine Slitz, winning its Miss Slitz title.

‘I don’t regret anything’

The Swedish media was quick to publish the photos when the couple’s engagement was announced in June 2014.

While the pictures may have raised a few eyebrows, Hellqvist’s colourful past hasn’t led to any major controversy.

“It’s a shame there’s still so much written about that,” she told Swedish Television in a documentary about the royal family in January, referring to the racy photos.

“It was 10 years ago, I’ve gotten on with my life since then…I don’t regret anything,” she said.

Ahead of the wedding, royal-watchers speculated that she may have been under pressure by the palace to remove or hide her tattoos — but they were proven wrong as one on her upper back was clearly visible as she stood at the altar.

Raised in a middle-class family in the small central Swedish town of Alvdalen, Sofia left Sweden for New York in 2005 where she studied accounting and worked as a yoga teacher and waitress before returning to Sweden.

In 2010, she and a friend founded the “Project Playground” charity to help disadvantaged children in South Africa, after working as a volunteer in several African countries.

She left her position with the organisation in March to focus on her new duties as princess following the wedding.

Unlike her brother-in-law Chris O’Neill — an Anglo-American businessman who is married to Carl Philip’s sister Princess Madeleine and who often snubs royal events — Sofia is popular among Swedes who admire her candour and commitment.