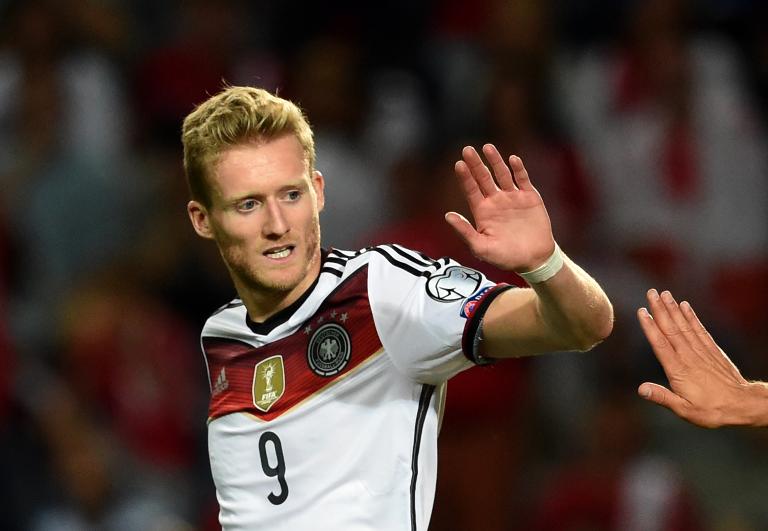 Andre Schuerrle scored a hat-trick as Germany eased to a 7-0 win over minnows Gibraltar in Euro 2016 qualifying on Saturday.

In a game played in Faro in Portugal’s Algarve, the World Cup holders answered coach Joachim Loew’s calls to improve on the finishing that had let them down in their 2-1 friendly defeat at home to the United States on Wednesday.

And the win keeps Germany in second place in qualifying Group D, a point behind leaders Poland and two points above Scotland in third position.

Their evening did not start well, Bayern Munich midfielder Bastian Schweinsteiger having a penalty saved by Gibraltar goalkeeper Jordan Perez in the 10th minute.

The breakthrough eventually arrived courtesy of Wolfsburg forward Schuerrle in the 28th minute before the massive gulf between the sides was finally laid bare in the second half.

Max Kruse, the Borussia Moenchengladbach forward who will be a team-mate of Schuerrle’s at Wolfsburg next season, replaced Mario Goetze late in the first half and made it 2-0 two minutes after the restart.

Ilkay Gundogan and Karim Bellarabi added further goals before the hour mark and Schuerrle netted twice more to complete his hat-trick, leaving Loew relaxed enough to concentrate on filing his fingernails in his seat in the dugout.

Kruse added his second of the evening to make it 7-0 with nine minutes left, leaving Germany well placed before a double-header of games at home to Poland and away to Scotland that is likely to prove decisive.

Gibraltar have now lost all six matches in their first ever qualifying campaign for a major tournament, scoring just once and conceding 34 goals.