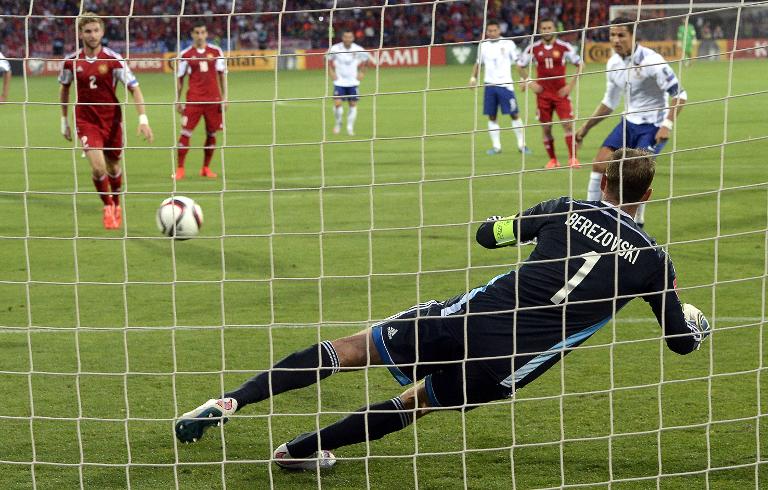 Yet another Cristiano Ronaldo hat-trick propelled Portugal to a crucial 3-2 win in Armenia in Euro 2016 qualifying on Saturday while Poland’s Robert Lewandowski hit one of the quickest triples in the competition’s history.

Andre Schuerrle also bagged a hat-trick in Germany’s 7-0 thrashing of Gibraltar but former European champions Greece’s embarrassing campaign continued as they were beaten 2-1 in the Faroe Islands.

Real Madrid superstar Ronaldo scored his third hat-trick in his last three games for club and country as Portugal held on with 10 men for the final half-hour in Yerevan to claim a crucial win in Group I.

Brazilian-born Marcos Pizzelli gave Armenia the lead but Ronaldo equalised from the penalty spot before adding two more in the space of four second-half minutes.

Fernando Santos’ side then had Tiago Mendes, the Atletico Madrid midfielder, sent off and were left to hang on after Hrayr Mkoyan pulled a goal back for the hosts.

Portugal have now won four games in a row since starting their campaign with a 1-0 home defeat to Albania and they top Group I by two points from Denmark, who beat Serbia 2-0 in Copenhagen thanks to a goal in each half from Yussuf Poulsen and Jakob Poulsen.

Poland remain top of Group D ahead of World Cup holders Germany after Lewandowski’s late hat-trick sealed a 4-0 win against Georgia in Warsaw.

Arkadiusz Milik put the Poles in front before captain Lewandowski doubled their lead in the 89th minute.

The Bayern Munich striker added another in the 92nd minute and completed a remarkable treble in the third minute of stoppage time to secure a handsome win.

It is the second-fastest hat-trick in the history of European Championship qualifying, bettered only by Arif Erdem, who scored three in three minutes for Turkey against Northern Ireland in the qualifying campaign for Euro 2000.

Poland are a point clear of Germany, who won 7-0 against minnows Gibraltar in Faro, southern Portugal, despite Bastian Schweinsteiger having an early penalty saved.

Schuerrle set them on their way and six more goals followed in the second half, including two more from the Wolfsburg forward, a brace from Max Kruse and one each for Ilkay Gundogan and Karim Bellarabi.

Scotland remain third, two points better off than the Republic of Ireland, after coming from behind to draw 1-1 in Dublin, Shaun Maloney’s shot deflecting in off home skipper John O’Shea to cancel out Jon Walters’ opener for Ireland.

The prospect of seeing all four British sides qualify together for a major tournament for the first time since the 1958 World Cup remains a very real one, with Northern Ireland still second in Group F after a 0-0 draw at home to leaders Romania at Windsor Park.

Michael O’Neill’s side are a point behind the Romanians and two better off than third-placed Hungary, who boosted their own chances by winning 1-0 in Finland thanks to a late goal by Zoltan Stieber of Hamburg.

However, Greece’s disastrous campaign continued as they were beaten 2-1 by traditional minnows the Faroe Islands in Torshavn.

A goal in each half from Hallur Hansson and Brandur Olsen secured a famous win for the hosts, with Sokratis Papastathopoulos of Borussia Dortmund getting one back in vain for Greece.

It is the second time the Euro 2004 winners have lost to the Faroes in this campaign — coach Claudio Ranieri was sacked after a 1-0 loss at home in November.

There has been no improvement yet under his Uruguayan successor Sergio Markarian, and Greece are rock bottom of the group with just two points from six games.