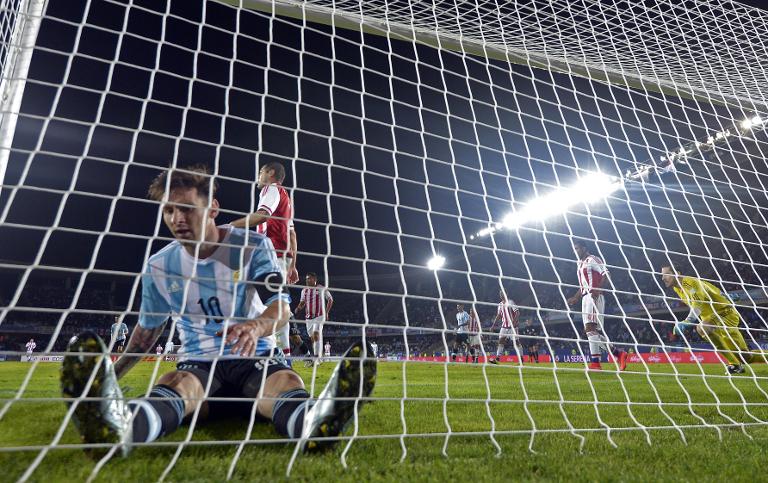 Argentina’s dreams of a first major title in 22 years were given a reality check as Paraguay came from behind to snatch a last-gasp 2-2 draw in a Copa America classic.

English Premier league star Sergio Aguero and captain Lionel Messi looked to have put Argentina on the road to a routine victory in Group B after firing the tournament favourites into a 2-0 first-half lead.

But a long-range strike from Nelson Valdez hauled Paraguay back into the contest before Argentine-born forward Lucas Barrios grabbed a dramatic 90th-minute equaliser.

The stunning comeback left Argentina in shock and could complicate their route through the knockout rounds in Chile.

“It is a sin,” to give away an equaliser in the final minute, Argentina coach Gerardo Martino said afterwards, lambasting his team’s “neglect.”

“We lost control and the other team had four or five chances to get a draw,” Martino told a news conference.

“We had many chances to win,” he added, saying that the team in the second half were “totally different from the side that played in the first half.”

“I do not think we need to change anything. What we have to look back at the two games we played in the 90 minutes today.”

Paraguay goal hero Barrios was jubilant after his team’s heroics.

“This group is so tough that getting a draw in the last minute against Argentina is like a victory,” said Barrios, who plays for Montpellier in France.

Paraguay’s other goalscorer, Valdez, paid tribute to the spirit shown by his team-mates.

“Individually we are less than Argentina, but as a team we are better than them,” he said. “We needed a slap in the face at half-time.”

Argentina, runners-up in the World Cup final last year, are aiming to win their first major tournament since victory in the 1993 Copa America.

They now face a crucial second match on Tuesday against holders Uruguay, who struggled to impress in a lacklustre 1-0 win over Caribbean minnows Jamaica earlier Saturday.

Uruguay, the defending champions, badly missed their suspended striker Luis Suarez, who is still serving a ban for biting Italy’s Giorgio Chiellini at the World Cup.

La Celeste captain Diego Godin demanded improvement on Saturday after a solitary goal from Cristian Rodriguez saved their blushes against the Reggae Boyz.

“It’s a good result to start with, now we need to correct some mistakes,” Godin told Chilean television.

“It’s very important to win the first game in the Copa America, as it is in any big tournament,” the Atletico Madrid defender added. “We have to go game by game, but we will have to improve and keep working hard.”

Uruguay barely created a chance against Jamaica, one of two teams from the North America, Central America and Caribbean zone (CONCACAF) invited to take part in the Copa America, along with Mexico.

Uruguay finally broke the deadlock seven minutes after the break with a cleverly worked set-piece routine.

Boca Juniors midfielder Nicolas Lodeiro floated a free-kick from wide on the left for defender Jose Maria Gimenez, who lost his marker to head back into the area for Rodriguez, on loan with Brazilian side Gremio from Atletico Madrid, to finish.

Colombia play Venezuela in the other match on Sunday.