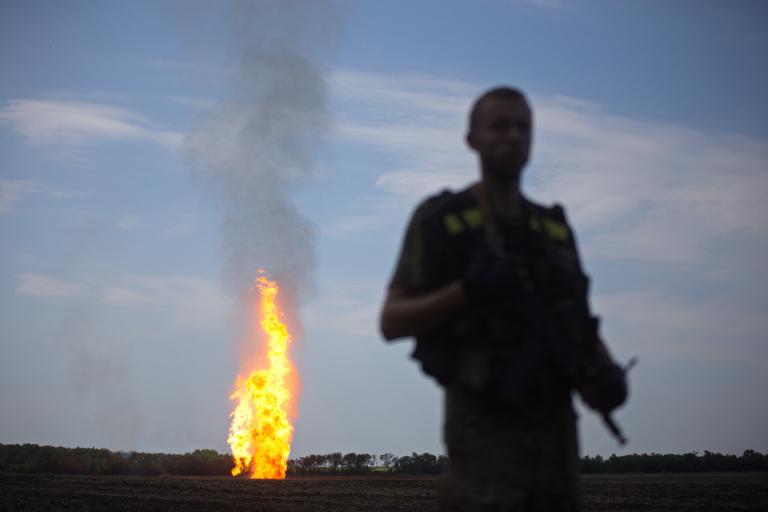 Ukraine’s faltering peace deal suffered fresh setbacks on Saturday when Kiev reported the deaths of six soldiers and accused Moscow of abetting an attack on one of its Russian consulates.

The latest fatalities in the twisting and hotly disputed zone separating Ukrainian forces from their pro-Russian foes in the separatist east add to the strains of a February truce designed to end one of Europe’s deadliest conflicts in decades.

The 14-month war has claimed nearly 6,500 lives and turned Russian President Vladimir Putin into an increasingly isolated figure blamed for pulling a Cold War-era pall over Moscow’s relations with the West.

It has also driven more than a million people from their homes and left Ukraine — anxious to rebuild after decades of post-Soviet neglect — without access to much of its industrial heartland and far fewer opportunities for growth.

The February accords that the leaders of Germany and France effectively forced upon Putin and Ukrainian President Petro Poroshenko had initially helped limit the fighting to hotspots whose status had been under dispute from the start.

Western monitors said the clashes came after both sides pulled their heaviest guns up to the truce line in apparent preparation for a hot summer campaign.

Saturday’s casualties bring to about 50 the number of people reported killed this month — a figure that fails to include all the deaths suffered by the secretive and partially splintered rebel command.

Ukrainian military spokesman Andriy Lysenko said overnight clashes had been especially heavy around the fragmented remains of the once-gleaming airport on the outskirts of the separatists’ de facto capital Donetsk.

Eastern Ukraine’s busiest air hub turned into a symbolic war prize that Kiev lost hundreds of soldiers defending until January. Neighbourhoods around the airport suffer continual shelling to this day.

“The situation near the airport is particularly restive,” Lysenko told reporters.

“Our enemies have thrown tanks, infantry combat vehicles and artillery into battle.”

A separate Kiev statement said “the past few days have seen the highest rate of activity from pro-Russian (rebels) in a month.”

The battlefield bloodshed has been compounded by tensions surrounding the occasion of Friday’s Russia Day holiday.

Ukrainian nationalists interrupted a celebratory reception at the Russian consulate in the eastern city of Kharkiv on Thursday evening by pelting the building with blue paint and eggs.

Russia’s foreign ministry accused Ukraine’s police of taking no action and Kiev of “once again flagrantly violating its international obligations under the 1963 Vienna Convention on Consular Relations”.

A group of what Kiev denounced as “barbarians” took their revenge on Ukraine’s own consulate building in the western Russian city of Rostov-on-Don overnight.

Footage filmed by Life News — a Russian TV station with close links to the powerful state security service — showed the Ukrainian building covered in green paint and one of its windows broken.

The vandals had torn down the consulate’s coat of arms and left behind empty cartons of eggs and remains of tomatoes used to pelt the building before the Kremlin-linked station’s crew arrived on the scene.

Ukrainian Foreign Minister Pavlo Klimkin condemned the incident, which he called another example of Russian “aggression”.

“The Russian propaganda (channel) taped everything. The police gave the barbarians the time to do their deed,” Klimkin tweeted. “Does Russia’s aggression have no end?”

But local member of parliament Yekaterina Stenyakina said the incident was staged by local Ukrainians in an attempt to further discredit Russia’s image on the global stage.

“The number of Ukrainian citizens in the Rostov region is very high,” she tweeted.