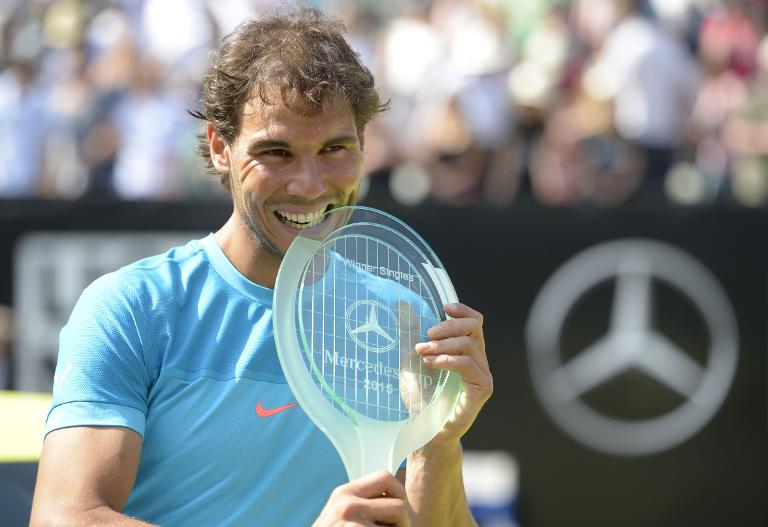 Rafael Nadal earned his second title of the season and his fourth on grass as he defeated Serb Viktor Troicki 7-6 (7/3), 6-3 on Sunday to become the first man to triumph on both clay and turf at the Stuttgart Open.

The Spanish top seed set another minor record, as he won the inaugural grass edition after taking clay trophies here in 2005 and 2007. Stuttgart made the switch to grass starting with this edition as part of the new Wimbledon pre-season.

The 14-time grand slam champion who is ranked 10th, polished his record against eighth seed Troicki to 5-0, last facing the Serb in a Tokyo semi-final nearly five years ago. Nadal took victory as he played his his 95th career final, now standing 66-29 in finals.

His last grass final came at Wimbledon in 2011 when he lost to Novak Djokovic. Troicki was playing his seventh career final – and first on grass – and now stands 2-5 in title matches.

Nadal’s victory boosted him to 33-10 this season as he prepares for what he hopes is a better second half of 2015. He is now 17-2 in Stuttgart, where he last competed eight years ago.

“I’m not bothered by the expectations of others,” said the 29-year-old. “I’m only motivated by my own goals, There is no pressure on me

“It’s fantastic to win here on grass after winning on clay. Victor is a tough opponent.

“But I’ve been gaining confidence over the past month and a half after a very poor first three and a half months of this season.

“I’ve been feeling my game better since after my first match in Monte Carlo (mid-April). It was mentally tiring for me to play tennis in the first part of the year. I was not feeling comfortable on court.

“I was not able to play the way that I wanted. I didn’t feel confidence. But that has been changing and my focus now if to prepare as best as I can for Wimbledon.”

Nadal added: “My level has always been there, I’ve not forgotten how to play tennis. But now things are coming together for me.”

Nadal spent 48 minutes in winning the opening set, which he took into a tiebreaker with a love game. The top seed grabbed the early 4-2 lead in the decider and fired a ninth ace to wrap up the opener.

In the second, the Spaniard broke for 3-1 and took victory on his third match point, ending with 11 aces in the 88-minute contest.