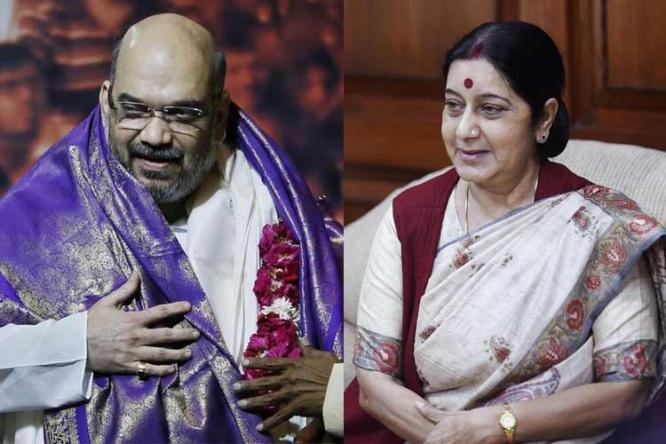 Taking a dig at the Congress, BJP President Amit Shah said, “Lalit Modi was not helped the way Warren Anderson and Ottavio Quattrocchi were.Â Sushma Swaraj has already given her clarification on Twitter. She has helped an Indian National who wanted to treat his wife for cancer. Sushma Swaraj asked UK Minister to help Lalit Modi as per the laws of their country.”

While slamming the Opposition for demanding the Union Minister’s resignation, Shah said that the issue of visa for Lalit Modi should not be politicised.

Meanwhile, Union Home Minister Rajnath Singh, too, came to Sushma’s defence saying what she did was right and that the government stands by her.

Keith Vaz, one of Britain’s longest- serving Indian-origin MPs, was reported earlier in the month to the parliamentary standards commissioner after lobbying visa officials on behalf of former IPL chief Lalit Modi.

The Labour MP wrote to Sarah Rapson, the director-general of UK visas and immigration, inquiring whether Modiâ€™s â€œtravel document could be made availableâ€, revealed a report in the Sunday Times.

Modi fled India for England in 2010 after his passport was revoked amid claims of financial irregularities.

After a long and drawn out battle with Britain’s immigration authorities, the former BCCI official was granted leave to remain in March last year, allowing him to apply for British travel papers.

Sushma had admitted that she had no objection to Modi’s request to be allowed to travel out of UK and spoke to this effect with British MP Keith Vaz and the British High Commissioner. Sushma clarified that she intervened on humanitarian grounds as Modi’s wife needed treatment in Portugal.

Sushma tweeted, “Sometime in July 2014 Lalit Modi spoke to me that his wife was suffering from cancer and her surgery was fixed for August 4 in Portugal. He told me that he had to be present in the hospital to sign the consent papers. He informed me that he had applied for travel documents in London and UK government was prepared to give him the travel documents.”

Earlier, government sources said Sushma’s position has become untenable and the Prime Minister’s Office is aware of the developments and is looking into the matter.